What's in a Name? Plenty. 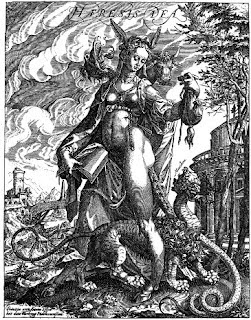 Sitting here eating my lunch, I have just been reading an entry in a well-known priest's blog in which Father forthrightly and correctly identifies certain dissenting Catholics as "heretics."

This started a train of thought.  In my lifetime, the words "heretic" and "schismatic" have not been much in use.  These words only hurt people's feelings, we have been told, and serve further to alienate our separated Protestant brethren, and encourages triumphalism among Catholics, etc., etc., etc.  A booklet about the Divine Mercy devotion that I bought a few years ago even goes so far as to purge the words "heretics" and "schismatics" from the Divine Mercy novena.  St. Faustina records in her Diary that in this novena, Jesus asked her to recommend to Him various groups of people, including -- in so many words -- heretics and schismatics.

So has dropping the terms "heretic" and "schismatic" dramatically advanced the cause of ecumenism and seeking out the lost sheep of the fold?  Or has it served merely to make Catholics think that, like the monsters that used to live under our beds, there are no such things after all as heretics and schismatics?

And in whose interest is it that Catholics should dismiss as nursery fables the concepts of heresy and schism and their adherents?  Could it be that the same people who have pushed this purgation of the language would themselves have been denounced as heretics and schismatics only a few short decades ago?

I seem to recall that the ancient Egyptians believed that if you eradicated a person's name and image, that person ceased to exist.  They might have been onto something.
Posted by Anita Moore at 12:58