On Being Starved into Submission 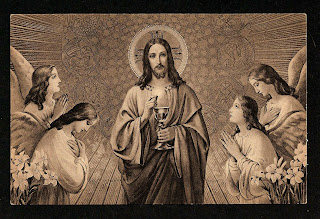 I recently attended my first ever Missa Cantata, celebrated by the inimitable Fr. Andrew Szymakowski -- the first Mass in the Extraordinary Form that I have been able to attend since the beginning of January.  I was reminded that one of my favorite things about the Extraordinary Form is that the priest blesses the communicant with the Host before placing It on the tongue: a miniature benediction of the Blessed Sacrament for each person who comes to receive It.

This detail set me on a train of thought.  Why, I wondered, is this not done anymore?  Who was the great brain who considered it necessary to discontinue this practice?  I can't come up with one earthly reason why this blessing with the Host should not be done in the Ordinary Form of the Mass; yet it almost never is.  I never, ever saw a priest do it until I attended my first Mass in the Extraordinary Form; and Fr. Andrew is the only priest I have ever seen do it in the Novus Ordo.

But then, of course, in recent decades, a great many things have been swept away in the Church's Great Leap Forward.  Beautiful altars and statues and icons, myriads of devotions and blessings, numerous disciplines and countless symbols and marks of Catholic identity  -- even the traditional language and liturgy of the Latin Rite -- have been unceremoniously dumped for the sake of the alleged "springtime" of the Church, in which we were expected to divest ourselves of the vast accretion of superfluities and get "back to basics."

Surely this infantile regression is not the work of Divine Charity.  Extras, as Sir Arthur Conan Doyle once observed through the lips of Sherlock Holmes, can issue only from the goodness of Providence.  This Goodness provides us with an abundance of extras that are nothing less than the effusions of a loving Heart.  Music; flowers; the sunlight on the water; the night sky; chocolate; painting and sculpture; gatherings of friends over a pint of beer or a glass of wine; we don't need these things to keep body and soul together, but we do need them to feed our souls and our humanity.

Still, the world is filled with people who have forgotten their humanity, and not only take no thought for their own souls, but believe that nobody else should, either -- and unfortunately, many such have the power to impose their whims on others.  These are the totalitarians.  Not content to lead their own lives, they must run the lives of others.  The totalitarian mindset that goes by the Orwellian name of "liberalism" always keeps people at or below the level of bare subsistence. That way, they can focus on nothing except surviving, and are thus easier to control.

This is true whether totalitarianism subsists in secular governments or in the Church. The mentality that holds that we ought to do away with all that which is not strictly "necessary" in worship, without all the little extra treats that used to nurture our devotion, is nothing but totalitarianism.  All the years the liberals have held sway, we have been kept hungry.  So hungry that we are ready to wolf down whatever poison they dole out to us -- poison that has turned our stomachs against the real food of Catholic faith and tradition  and devotion that has nourished saints for centuries.   Thus Catholics become docile foot soldiers in the armies of dissent, and loyal tools in the hands of those who hope to dismantle the Church and rebuild it according to their own ideas.

The blessing of each communicant at Mass with the Host is a very small detail -- if a blessing imparted by Christ Himself in the Eucharist can be called small.  But it does prove that real love resides in and provides for the smallest details, however easy they may be to miss.  Real love seeks to satisfy even the tiniest desires of the beloved.  Indeed, to real love, nothing is tiny or beneath notice.  Real love leaves undone nothing that can possibly be done for the beloved's happiness.

All of which is useful in helping us to distinguish real charity from the false ethic of deprivation in mockery of charity; from the enlightened sterility  disguised as love of poverty that actually quenches the Spirit; from the pharisaical pride of the liberals, who are liberal only with their destructive powers, and who attend to the tiny details only in order to smash them.
Posted by Anita Moore at 23:28