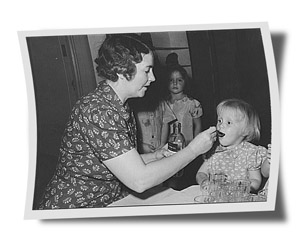 See the unfortunate child in the picture?  She is being fed a spoonful of cod liver oil.  Notice the expression on the face of the kid in the background, who appears to be next in line for the treatment.  I feel like that sometimes.  Now, if you are more observant than I am (it took me six months to realize I had a sliding pocket door at one end of my kitchen), you will have noticed that the identifying information above my profile picture (the chimpanzee at the typewriter) has changed.  Whereas before, it said "Anita Moore, O.P.L., Esq.," it now says "Miss Anita Moore, O.P., Esq."  This is because I have just had a cod liver oil moment.

St. Dominic founded the Dominican Order to preach, so the Order is officially known as the Order of Preachers (Ordo Praedicatorum in Latin).  Dominican friars (the First Order) and nuns (the Second Order) are identified by the letters "O.P." after their names (Ordinaris Praedicatorum, "of the Order of Preachers").  Dominican laity (the Third Order, or tertiaries) have hitherto been identified by the letters O.P.L. (Ordinaris Praedicatorum Laici) or T.O.P. (Third Order Preachers.)  T.O.P. is really the  more accurate designation, since the Third Order includes some congregations of religious sisters and even some deacons, priests and bishops who are not friars (St. Louis de Montfort and Ven. Pius XII, for example, were Dominican tertiaries).

The reason friars are called the First Order, nuns the Second Order, and laity-plus the Third Order, is because these designations denote the chronological order in which these branches of the Order of Preachers came into existence.  St. Dominic started with friars.  Then came Dominican nuns.  Then came the tertiaries.  That's it!  It's as simple as that.  It has nothing to do with who's better, who's holier, who's more valuable or who ranks whom.  But there are those who somehow got their britches in a twist over the idea  that these designations pointed to a sort of caste system within the Order, pursuant to which the "lower" orders were being oppressed, kept down, marginalized, etc. etc. etc. by the "higher" ones.  Undeterred by the non-existence of such a caste system, the britches-in-a-twist crowd has not been idle.

Fast forward to a few years ago, when an international meeting of Dominican laity resolved on the use by the laity of the designation "O.P.," which had hitherto been reserved for priests and religious.  This was approved by the Master of the Order.  A petition to the General Chapter in Rome to revert to "O.P.L." has now failed to achieve the desired result.

Hence my cod liver oil moment.  I am obliged to abandon "O.P.L." in favor "O.P.,"  affixing the title "Miss" or "Dr." to my name in order to show that I am a layman and not a religious.   I am obliged, I repeat, to identify myself as a Dominican tertiary in this manner; but since this is not a doctrinal matter, I see no reason why a record should not be made of why this is a lousy idea, just as stare decisis is no reason why an appellate court's ruling should not also include dissenting opinions (which it frequently does).  So: reasons why this is a lousy idea:

-- The Order of Preachers was founded to preach the truth.  Veritas ("truth") is a motto of the Order.  The reasons for making this change are not based on reality, since the caste system which this innovation is meant to attack does not exist.  This scheme is therefore an assault on the truth and a subversion of the Order's whole reason for being.

-- Not one inch should ever be conceded to the liberals.  Concessions to liberals are bad enough in themselves.  But by giving in here to the liberals, the Order is passing up an opportunity to teach the truth about the First, Second and Third Orders.  This is most un-Dominican.

Ah well.  Causa finita est, at least for the time being.  None of this changes anything.  Still, one of the things that does not change, even after this little victory for the liberals, is the fact that it is they who ought to have to swallow the cod liver oil.
Posted by Anita Moore at 00:00