How We Hate Our Children 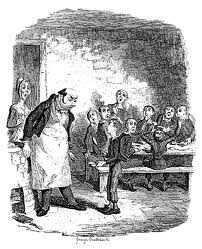 I suspect that when we read Oliver Twist or David Copperfield or Nicholas Nickelby, we are tempted to give ourselves virtuous airs over how far advanced we are as a society.  After all, there are no Dickensian workhouses presided over by overfed tyrants in this country, or festering cesspools of tuberculosis, thin gruel and regular scourges passing as boarding schools.  Armies of grime-covered, emaciated children do not rise before dawn to file into textile mills, and couples with ten or 15 children are not forced to crowd into one narrow, windowless room in a rat-infested tenement in a broken-down slum.

Dickens paints a picture of a world dominated by naked brutality.  But we today sigh and cluck and shake our heads at it from the midst of a world in which brutality reigns even more supremely, and is only papered over with sentimentality.  Witness these gushing felicitations over the success of Elton John and his homosexual partner, David Furnish, in securing an infant for themselves:

We are beyond thrilled Sir Elton John and his partner David Furnish were able to fulfill their dream of having a child, and on Christmas Day no less! But we can't help wonder who their "mystery" egg donor was, and which sperm was used to create little Zachary Jackson Levon Furnish-John.

Technically Zachary has two dads and two moms -- it was reported yesterday that sources at the surrogacy center in Encino, CA confirmed Elton and David used an egg donor separate other than the surrogate mother. So was a separate surrogate used to protect the egg donor's identity? Or did Elton and David find a willing donor with all the right genes who was willing to have her eggs harvested but NOT willing to carry the child?

And who did the sperm come from? Was it Elton's, David's, or was another "mystery" donor thrown into the mix? There's no denying Sir John would be very particular about his future son's genes, and with unlimited money and resources at his disposal he can definitely afford to dip into the very best gene pools.

Perhaps time will tell who the biological parents really are, but until then we wish the John-Furnish family much love and happiness as they begin this new journey together.

How many things can you find wrong with this picture?

1. Two Gay Men Playing House.  A marriage consists in one man and one woman.  All the laws, constitutional amendments and treaties in the world cannot change this.   A homosexual relationship is made to be walked away from, no matter the veneer of legality. The life of a child brought into an arrangement such as that between Elton John and David Furnish is therefore a house of cards, just like that of a child born to a man and a woman not married to each other.  The desire to bring a child into such a situation is based on pure selfishness.

2. Uncertain Parentage.  We are advised that "technically Zachary has two dads and two moms -- it was reported yesterday that sources at the surrogacy center in Encino, CA confirmed Elton and David used an egg donor separate other than the surrogate mother....And who did the sperm come from? Was it Elton's, David's, or was another 'mystery' donor thrown into the mix?"  Will this uncertainty regarding lineage tend to enhance or detract from the child's sense of security?  The Catechism of the Catholic Church at 2376 says:

Techniques that entail the dissociation of husband and wife, by the intrusion of a person other than the couple (donation of sperm or ovum, surrogate uterus), are gravely immoral. These techniques (heterologous artificial insemination and fertilization) infringe the child's right to be born of a father and mother known to him and bound to each other by marriage. They betray the spouses' "right to become a father and a mother only through each other."

3. The Manufacture of Designer Children.  The author of the above-quoted cloying eulogy gives it away in the first paragraph.  Note the phraseology: "But we can't help wonder who their 'mystery' egg donor was, and which sperm was used to create little Zachary Jackson Levon Furnish-John. And then again in the third:  "There's no denying Sir John would be very particular about his future son's genes, and with unlimited money and resources at his disposal he can definitely afford to dip into the very best gene pools."  So what happens when the child fails to measure up?  How many earlier attempts at "creating" a designer kid failed to measure up before this one was born, and what happened to them?  The Victor Frankensteins of the world no longer need to frequent morgues and charnel-houses  and get up to their elbows in filth and gore in pursuit of their disreputable aims; now they have nice, clean, sterile "surrogacy centers" to work in, with white lab coats, masks, microscopes and rubber gloves to separate them from the horror.

4. Last But Not Least: No Proper Spiritual Upbringing for the Boy.  Suppose Elton and David take the child to church and get him a Bible.  How will the boy square what he hears in church and reads in the Bible with what he sees at home?   How will his conscience ever be properly formed?  How will he ever learn God's will for his life?  If he finds it out, what will motivate him to do it? Is it unlikely that the boy is to be groomed to follow in his "fathers'" "lifestyle choices"?  (Incidentally, was a male child part of the designer package?)

I think it's a safe bet we have never hated our children more than we do at this particular moment in history, or else we could not look upon such a spectacle as the Elton John affair with equanimity, much less beaming pride.  But we have been hardened and calloused for this moment over many years of licentiousness and sensuality.  We have given ourselves over to the pleasures of the flesh for so long that the only thing that matters to us now is our precious selves.  So when we're not aborting our children or contracepting them out of existence, we're overindulging them, or parking them in front of video games or television so we don't have to bother with them, or turning them over to the government to take care of, or sexualizing them at an early age, or -- as in this case -- treating them as commodities to be bought and sold and custom-made to suit our whims. The sentimentality with which we regard children in this society is nothing more than a cover for brutality of the worst kind.

The Holy Father has also noticed the dire straits of children in our times.  What better way to close than with the following, from his December 20th address to the Roman Curia (emphases added):

We are well aware of the particular gravity of this sin [of sexual abuse] committed by priests and of our corresponding responsibility. But neither can we remain silent regarding the context of these times in which these events have come to light. There is a market in child pornography that seems in some way to be considered more and more normal by society. The psychological destruction of children, in which human persons are reduced to articles of merchandise, is a terrifying sign of the times. From Bishops of developing countries I hear again and again how sexual tourism threatens an entire generation and damages its freedom and its human dignity. The Book of Revelation includes among the great sins of Babylon – the symbol of the world’s great irreligious cities – the fact that it trades with bodies and souls and treats them as commodities (cf. Rev 18:13). In this context, the problem of drugs also rears its head, and with increasing force extends its octopus tentacles around the entire world – an eloquent expression of the tyranny of mammon which perverts mankind. No pleasure is ever enough, and the excess of deceiving intoxication becomes a violence that tears whole regions apart – and all this in the name of a fatal misunderstanding of freedom which actually undermines man’s freedom and ultimately destroys it.