Mary, Conceived Without Sin, You DID Know 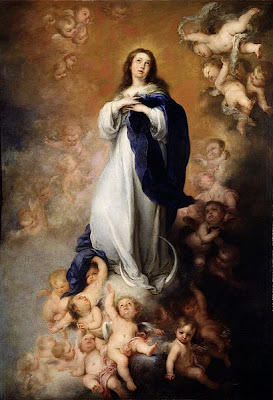 Raise your hand if you have ever heard the song "Mary, Did You Know?" within the precincts of a Catholic church.  I can't see you, but I know you're out there.  My hand is also up.  Somehow, because this song mentions the Mother of God, it has become a Christmas tradition in some parishes.  But although the gentleman who wrote "Mary, Did You Know?" clearly means well, this song is both musically inappropriate for Mass and subversive of the Catholic faith.

From a musical standpoint, "Mary, Did You Know?" is basically a pop song, and although the Mass has been saturated with such for a couple of generations now, the fact remains that it is not sacred music suited for use at Mass.  But even more objectionable, from the Catholic point of view, is the lyrical content.

"Mary, Did You Know?" is based on some abysmally erroneous assumptions.  To begin with, it is supposed that Mary does not know that her holy Infant is the Son of God.  Some saints -- for instance, St. Alphonsus Liguori, bishop and Doctor of the Church -- are of the opinion that even before the Annunciation, Mary had a profound understanding of prophecies and Scriptures concerning the promised Messiah.  But even without such an understanding, it would have taken a high degree of inattention on Mary's part to the message of Gabriel and the inspired greeting of her cousin Elizabeth for her to labor under ignorance of her Son's divinity.  It is further supposed that Mary does not know that her Son will suffer for the redemption of mankind.  This would have required her to utterly gloss over the prophecies of holy Simeon concerning her Son as God's salvation, a sign of contradiction, and concerning the sword of sorrow that would pierce her own soul.  The idea of the Mother of God not being in possession of the most critical facts about her divine Son, particularly in view of explicit revelations received by her, is absurd on its face.

But there is an even more blatant error in the lyrics of "Mary, Did You Know?" that ought to induce in every Catholic a sharp intake of breath.  It is a defined dogma of the Catholic faith that the Mother of God was conceived without original sin.  On December 8, 1854, in the Apostolic Constitution Ineffabilis Deus, Pope Pius IX defined the dogma of the Immaculate Conception:

Contrast this with the following lyrics from "Mary, Did You Know?":

Whereas Catholics accept as revealed truth that Mary was free from sin from the instant of her conception by virtue of the anticipated merits of Jesus' suffering and death on the Cross, the foregoing is based on the assumption that Mary was under the sway of sin at the time she gave birth to the Christ Child, and that she would remain so until His Sacrifice of redemption.  In short, it is a flat denial of the Immaculate Conception.  As such -- and for this reason alone -- it should never be sung in a Catholic church, or find any place in any Catholic liturgy, and Catholics should not embrace it.

Perhaps a fitting way to honor today's feast of the Immaculate Conception -- in addition to fulfilling our obligation to attend Mass -- would be to defend the dogma which this feast celebrates by doing what we can to see that "Mary, Did You Know?" remains unheard in our parishes during this and every Christmas season.
Posted by Anita Moore at 21:58