These Are Indeed Stern Times 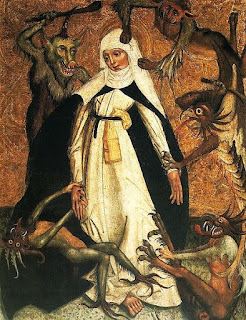 The Holy Father abdicates, citing his incapacity in the face of a rapidly changing world shaken by questions of deep relevance for the faith.  Then, all kinds of things start happening in the lead-up to the next conclave that threaten to affect the selection of a new Pope.  Rumors fly regarding Pope Benedict's motives, and whether he wasn't really forced out, and whether his abdication had to do with a network of gay prelates in the Vatican.  We have some rather distressing statements coming from the bishops of Germany on the subject of the "morning after" pill in cases of rape.  We have Scotland's Cardinal O'Brien, previously outspoken in defense of traditional marriage, coming out in favor of priests getting married.  Now we have the news that this same cardinal is facing accusations of past misconduct.

And if this particular moment is a critical one, we'd better ratchet up the prayers and penances.
Posted by Anita Moore at 21:59