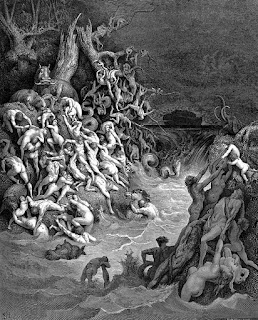 Yesterday's election should have been a no-brainer.  That Obama got into the White House in the first place on his prior record is bad enough; but that a majority of voters should re-elect him after he has spent the last four years promoting intrinsic evils, running this country into the ground, pandering to her enemies and openly opposing everything she stands for shows how far gone we are.

Stark reality: the majority of voters in today's America simply do not recognize evil when they see it.  We are surrounded by evil, at home, at school, at work, on television, in popular culture, until it seems normal.  We take vice for virtue, and virtue for vice, or, at best, a form of mental illness.  We are mired in habitual sin, especially lust.  We equate the pursuit of sensual pleasures to the pursuit of happiness, and sensual pleasures are now more important to us than life itself.  Not only are we willing to kill ourselves and others in the name of pleasure; we will tolerate even the extinction of the human race.  In today's America, formerly illicit liaisons enjoy the protection of law.  Sodomitical unions take the place of natural relations, and concubinage takes the place of stable families.  And the land is awash in the blood of the unborn.  According to the Guttmacher Institute, there were 1.21 million abortions in this country just in the year 2008.  That is more than the total number of Americans killed in the Civil War and both World Wars.  According to the same source, there were nearly 50 million abortions in the United States between 1973 and 2008.  That approaches the total number of people who perished in World War II.  These figures do not even take into account the numberless souls who are kept out of existence by contraceptives, many of which are abortifacients.

In the face of all of which the Catholic Church in America has remained silent.  For decades, with very few exceptions, American priests and bishops have not uttered a peep about the tsunami of spiritual sewage bearing down on their flocks.  The results are not surprising.  28% of women who have abortions identify themselves as Catholic.  98% of sexually experienced Catholic women have committed the sin of contraception.  Catholics are indistinguishable from non-Catholics in the rate of divorce.  Half of Catholic voters voted for Obama.

America has turned her back on God and His law, and now He has decisively allowed her to be turned over to her enemies.  This is God’s judgment on the United States, because she will not stop offending Him.  And since the United States will now no longer offer refuge to the oppressed or keep the world’s barbarian warlords in check, it is also His judgment on the whole world for its sins.

There are no political solutions to our problems, only spiritual ones.  The words of Our Lady of Fatima are no less true now than they were 95 years ago.  We must repent, stop sinning, and do penance.  And we must pray the Rosary.  Every day.  Without fail.

All you Dominican saints, whose feast day is today, pray for us.
Posted by Anita Moore at 19:58