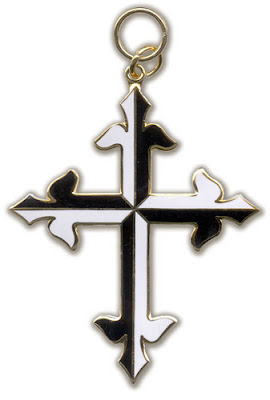 Whenever I complain about the lack of statuary or crucifixes in a church, or bare, whitewashed walls in a chapel, there always seems to be somebody around to remind me, in lofty tones, that I shouldn't need all that paraphernalia, and that having Jesus in the (ugly, '70s-style) tabernacle should be enough to satisfy and fascinate me (just as it is enough to satisfy them).  There is this mentality prevalent, according to which statues and pictures and symbols are a pure distraction, the desire for which is a sign, at best, of immaturity, and at worst, of a lack of faith.

I have reason to doubt that this is God's view of the matter.  For one thing, He Who told us that we must become like children in order to enter the Kingdom of Heaven gave us our senses, and ordained that they should be the mediators between our souls and the world outside.  A believing Catholic ought to reject the notion that there is no role for the senses in the world of faith: God established the Seven Sacraments as outward signs of inward graces, so that, in approaching the Sacraments, we might be absolutely certain, by means of evidence detected by our senses, that we have received the graces we have sought.  Besides, until very recently, when this new iconoclasm became fashionable, the Church has always provided for the senses with beautiful architecture, statues, stained-glass windows, incense, bells, vessels, and vestments, each of which was filled with meaning, and served (a) to  focus us on the August Sacrifice; (b) to remind us that the house of God is really the portico of heaven, and (c) to surround us with subjects for prayerful meditation so that our minds need not wander along with our eyes.

There are those reasons for doubting the no-knick-knacks-necessary crowd.  And then there is my own story of how I came to be a daughter of St. Dominic.  The image above is a picture of a profession cross.  If you are looking at it on a regular computer screen, it appears slightly larger than the one I received when I made my life profession.  It is known in heraldry as the cross fleury, because of the fleur-de-lis on each end.  White and black are the colors of the Order.  Lay Dominicans customarily wear either this cross or the white scapular to chapter meetings.  I have previously told the story in this space of how I came to be swept into the Dominicans through the intercession of Bl. Margaret of Castello, the patroness of my chapter.  It is all true.  But now I shall disclose an additional detail that I have never before admitted publicly.

Although everything had been arranged for me to enter the Third Order of Preachers, I could still have refused to do so.  I knew, deep down, that it would be ill-advised to refuse to take a road so clearly marked by the hand of Providence, and to which all barriers and obstacles had obviously been swept away; but I had misgivings all the same, because it wasn't what I wanted.  Still, I said yes.  I would like to be able to say that my consent was motivated by reasons of high spirituality or intellect, or some other lofty and noble consideration.  But when the rubber meets the road, the thing that induced me to say yes was not the charism of the Order (about which I had no opinions) or its history (about which I was ignorant) or its traditions (about which I was even more ignorant) or Dominicans I had previously known (whom I remembered with very little affection) or even its long honor roll of illustrious saints (of which I was vaguely aware).

What induced me to say yes was the profession cross.  I was attracted to it.  All the Dominicans wore one.  I wanted to be able to wear one too.

That's it!  It's as simple as that.  No trumpets; no shining clouds; no cherubim nor seraphim; no heavenly choirs.  I was not unaware that a commitment was required in exchange for the privilege of wearing the black and white cross fleury, but the fact remains that I was drawn in by a piece of ecclesiastical bling, dangled before me like a lure in front of a fish.  I bit down on it and swallowed.

As silly as this sounds, I do believe there is some precedent for this sort of thing.  For instance, somewhere -- I no longer remember where -- I can recall reading or hearing the story of a priest who got his vocation on account of a beard.  As a little boy, he saw a Capuchin friar with a big, bushy beard, and liked it so much that he wanted to be a priest, so that he too could have a beard like that.   Still: that is the story of a little kid.  Should a grown woman be thinking along those lines?  After all, I was 36 years old when I entered the Order.  Yet when I received my little postulant's cross, I never wanted to take it off.  I wore it for the rest of the day, and to bed.  I wore it every day throughout my postulancy, until I received the medium-sized novice's cross -- by which time the little cross was so shabby and ratty-looking that I retired it to a jewelry box.   I made a black-and-white beaded herringbone-stitch rope for the novice's cross; and now my big life-professed cross hangs from that rope.  I am proud to wear this insignia of the Order to chapter meetings and other Dominican and Church functions.  For everyday use, I wear a little Dominican shield with the cross fleury on my lapel, and also on the lanyard that carries my employee badge for work.

Perhaps I ought to reproach myself for being so childish and superficial as to be easily stirred by such trivia.  The world is full of people who would agree with that assessment.  But then again, perhaps a more appropriate response would be thankful reflection upon God's immense goodness and kindness.  Extras, as Conan-Doyle once remarked through the lips of Sherlock Holmes, could only issue from the goodness of Providence.  God is not content to provide us merely with what we need.  He also showers us with extras, like this profession cross, things that we do not absolutely require for our survival but which it pleases Him to give to us for our pure pleasure.

And then there is His goodness in using all necessary inducements, however trivial, to get us onto the right path and keep us there.  Clearly, He wanted me to be a Dominican.  It is an immense gift, wholly unasked for and undesired, the full meaning of which I do not expect to be able to grasp in this life.  I can only suppose that it must be necessary for my salvation, because it is equally clear that He not only wanted me to be a Dominican, but was also very determined that, in my waywardness, I should not turn down this gift.  And so  He left undone nothing that could be done to induce me to accept it.  He thought of everything, down to the most minute detail.  He condescended to appeal to my aesthetic tastes, and to hold out this tiny reward in return for consenting to receive His awesome favor.

Though perhaps it is a mistake to call it a "tiny reward," since issues of such great moment depended on it.  And since it has meant so much to me.   And since Almighty God has, in His boundless goodness, thought to give this minuscule decoration a place in His inscrutable counsels regarding my eternal welfare.
Posted by Anita Moore at 21:18

Email ThisBlogThis!Share to TwitterShare to FacebookShare to Pinterest
Victory Topic(s): Dominicans, Spiritual Reflections, Stuff About Me