It's Better in Latin

Concerning a bilingual (English/Spanish) Mass like the one we had for All Saints' tonight, a couple of observations:

-- About ten Spanish-speaking parishioners showed up to the bilingual Mass.  This can hardly be defined as a success.  In fact, it came across as rather an embarrassment.

-- Even if more people showed up to the bilingual Mass, the question arises: does a bilingual Mass tend to underscore our unity as Catholics? or does it tend to underscore our ethnic/national differences?  Are our ethnic/national differences supposed to play a role in worship?  Does this practice have more in common with the Bride of Christ, or with the Tower of Babel?
-- Bl. John XXIII, whom the liberals hail as the Pope who ushered in the Age of Aquarius, thought that Latin ought to be preserved as the language of the Church, among other reasons, because

Of its very nature Latin is most suitable for promoting every form of culture among peoples. It gives rise to no jealousies. It does not favor any one nation, but presents itself with equal impartiality to all and is equally acceptable to all.

-- Here is a view of the worship aid distributed for tonight's Mass: 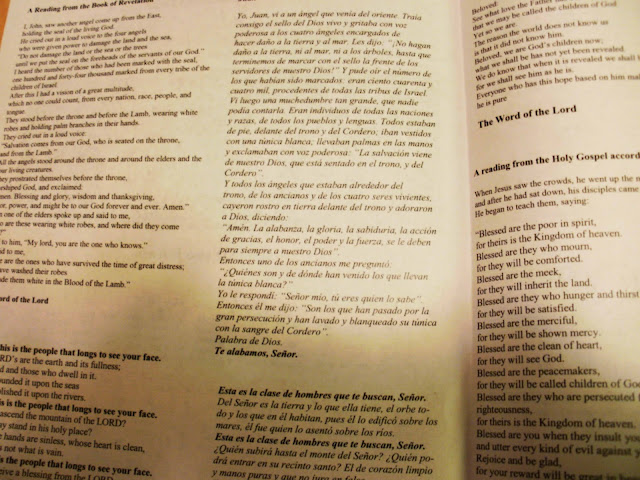 Notice: English on one side, Spanish on the other.  How come we can do this for Spanish, but not for Latin?
Mass is definitely better in Latin.  Herewith my vote for its revival.