Where Ignorance of the Faith Prevails 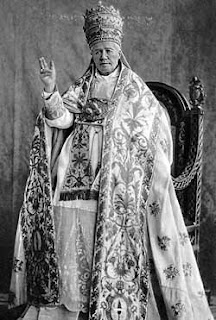 From the pen of St. Pius X, the great dissector of modernism, which he called the "synthesis of all heresies," Paragraph 2 of Acerbo nimis, a lesser-known yet no less penetrating encyclical on the importance of catechesis (emphasis added):

It is a common complaint, unfortunately too well founded, that there are large numbers of Christians in our own time who are entirely ignorant of those truths necessary for salvation. And when we mention Christians, We refer not only to the masses or to those in the lower walks of life - for these find some excuse for their ignorance in the fact that the demands of their harsh employers hardly leave them time to take care of themselves or of their dear ones - but We refer to those especially who do not lack culture or talents and, indeed, are possessed of abundant knowledge regarding things of the world but live rashly and imprudently with regard to religion. It is hard to find words to describe how profound is the darkness in which they are engulfed and, what is most deplorable of all, how tranquilly they repose there. They rarely give thought to God, the Supreme Author and Ruler of all things, or to the teachings of the faith of Christ. They know nothing of the Incarnation of the Word of God, nothing of the perfect restoration of the human race which He accomplished. Grace, the greatest of the helps for attaining eternal things, the Holy Sacrifice and the Sacraments by which we obtain grace, are entirely unknown to them. They have no conception of the malice and baseness of sin; hence they show no anxiety to avoid sin or to renounce it. And so they arrive at life's end in such a condition that, lest all hope of salvation be lost, the priest is obliged to give in the last few moments of life a summary teaching of religion, a time which should be devoted to stimulating the soul to greater love for God.  And even this as too often happens only when the dying man is not so sinfully ignorant as to look upon the ministration of the priest as useless, and then calmly faces the fearful passage to eternity without making his peace with God. And so Our Predecessor, Benedict XIV, had just cause to write: "We declare that a great number of those who are condemned to eternal punishment suffer that everlasting calamity because of ignorance of those mysteries of faith which must be known and believed in order to be numbered among the elect."

How much more true must these words be now than when they were written, 105 years ago.
Posted by Anita Moore at 13:54