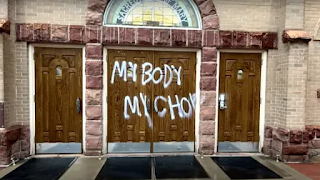 "Apocalyptic," as in, "unveiling," as in, the continuation of the exposure of people's and society's true colors that took off in earnest in 2020.  This image of a vandalized Catholic church in Denver (CBS Denver, YouTube screenshot) is becoming iconic and emblematic of the new front that has opened in the culture war with the leak of Justice Alito's draft opinion overturning Roe v. Wade and Planned Parenthood v. Casey.
Now that the dust is settling from the shock of this unprecedented breach of Supreme Court protocols, it seems plain that the purpose of the leak is to flip some justices, and to disrupt our already fragile civic order.  Some outfit called "Ruth Sent Us" is calling for the nationwide invasion of Catholic Masses on Mother's Day to "protest" the apparently immanent overturning of two of the most evil decisions ever to emanate from the Supreme Court.  "Ruth" refers to Ruth Bader Ginsberg, the late and very pro-abortion Supreme Court justice who, among other things, dissented from Gonzales v. Carhart, 550 U.S. 124 (2007), which upheld the Partial Birth Abortion Ban act of 2003.
Those who strive to lead normal, sane lives are probably unaware of how much Ruth Bader Ginsberg is idolized by women in the legal profession, which has long been co-opted by the left.  There is all kinds of RBG trash out there, from wall art to coffee mugs to T-shirts to bobble-head dolls, and it litters the offices of many women lawyers.  It is depressing to see how many women have made a hero out of this pathetic degenerate who believed that the "right" to execute the unborn is a necessary guarantee of women's rightful place in society.  She is a fitting mascot for pro-abortion hooligans and for those who engineered this appalling subversion of the high court's deliberations.  No one who swears an oath to uphold the law, as lawyers do, should want such bedfellows.
And now that Roe and Casey appear to be on the chopping block, more people feel called upon to come out openly in favor of abortion.  This includes persons calling themselves Catholics.  If you are Catholic, and you support abortion, you number yourself among the enemies of the Church and should stop holding yourself out as Catholic.  At least we can be thankful that you now identify yourself for what you are, and no longer hide behind the Catholic name.
The lawlessness that passes for governance in our time also continues to be unveiled.  The purported legalization of abortion is contrary to natural and divine law and is therefore itself lawless; but now, the lawlessness need not keep the cover of law as before.  The leaker of the draft opinion had to be someone in a position of trust.  We will probably never know, this side of the General Judgment, who it was, unless someone who is prepared to cast away all is willing to blow the whistle.  Anyone who is prosecuted for the leak will probably be a patsy.  Whoever it is, we can now see that, any time the high court is inclined to make a course correction on an issue that has torn the country apart for decades, thuggery is always available to "correct" the correction.
Finally, there are those who distinguish themselves by silence when they ought to speak.  The rot in the Catholic hierarchy was already well-established by the time Paul VI issued Humanae vitae in 1968, and discovered that the opposition to his upholding of Church teaching was pre-planned and well coordinated.  A faithful Catholic hierarchy and laity could have stopped the movement that led to Roe v. Wade dead in its tracks.  Today a hierarchy beholden to secular powers and preoccupied with irrelevancies like "synodality" comes out with a weak-tea response to the Supreme Court leak while their flocks are threatened with violence in their own churches.  Once again, the Church of the New Advent proves it has got nothing for us in a time of crisis.
So, the apocalyptic drama that began in 2019 with the worship of idols in St. Peter's Basilica -- heralded, perhaps, by the fire at Notre Dame in April of that year -- continues.  It is not that things were better before -- they really weren't -- it's just that now we are no longer able to kid ourselves about who we really are and where we really are.  All poisons that lurked in the mud are hatching out.
Otherwise, we might never see the need to repent.
Posted by Anita Moore at 10:17