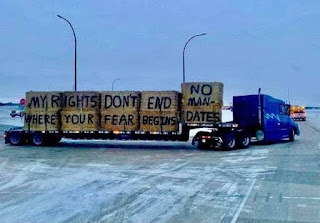 Thousands of big rigs have converged on Ottawa, the capital of Canada, and have blockaded the Alberta border crossing into Montana at Coutts, to demand an end to the draconian branch covidianism that has oppressed Canadians for the last two years.  Up to now, the Canadians have been largely compliant with their government's demands, with 78% of the population, and about 90% of truckers, being vaccinated; moreover, Canadians are known for being nice, polite and easy-going.  But at this writing, those Canadians who have made their opinion known appear overwhelmingly to support the Convoy, even in the face of obvious personal inconvenience.  Ottawa is a vast parking lot, with thousands of pedestrians demonstrating, contrary to restrictions, and truckers prepared with plenty of supplies to wait out the government.  Hillary White, a native of British Columbia, comments on the strict discipline and detailed preparedness of the truckers.  The truckers blockading the border crossing in Alberta have opened up one road for the benefit of the 200 or so locals, but otherwise have voted to face down the Royal Canadian Mounted Police.  The word going out on social media is that the RCMP is unable to find a towing company willing to travel to the border to remove trucks, despite offering four times the market rate for the job.  In the circumstances, we can assume that for the Canadians to take steps like these, they have, by any objective standard, been mightily provoked.
The corporate media coverage devoted to the Convoy is nothing compared to the 24/7, wall-to-wall coverage devoted to leftist-loving non-events like the January 6th "insurrection" and "Russia-gate," and is biased as one would expect.  Many of the few stories about the Freedom Convoy that one turns up via Google are days old.  One story, dramatically headlined "Police Move In as Public Turns on Truckers Blocking Alberta-Montana Border", extrapolates to "the public" from the comments of two (2) alleged truckers and a couple of members of the Alberta provincial government.  Meanwhile, film and still shots on the ground show large crowds of flag-waving, sign-carrying supporters lining the Convoy route in arctic temperatures to cheer the truckers on their way.
So far, Justine Trudeau (who claims to have covid, despite being triple-vaxxed) has responded to the protests by (a) going into hiding, (b) calling in the RCMP to deal with the border blockade, and (c) doubling down on the covidianism.  The government is announcing that, so far from backing down on vaxx mandates, it is considering implementing an even stricter mandate on truckers traveling between provinces (functionally, all truckers).  This obvious use of vaccine mandates as a tool of retaliation and punishment proves that their real purpose is control, and nothing to do with stopping the spread of any virus.
Contrary to how Justine Trudeau and his cronies and allies would like to portray the Freedom Convoy, this is not a "fringe minority" movement or some type of revolution.  It is a counter-revolution against the Marxist takeover of Canada, and it is taking hold all over the world.  In stories even harder to find objective coverage on than the Canadian Convoy, the Australians have organized their own convoy to Canberra, and there is word of a convoy to Washington, D.C.  Meanwhile, unless you do your own digging, you would never know that, week after week, thousands of marchers have been taking to the streets in cities all over Europe to demand an end to the Great Reset.
People are waking up, and rising up, all over the world; but right now, it is the Canadians, of all people, who occupy center stage.  Now that Canadians have thrown down the gauntlet, the ball is in Justine's court.  He may be a coward, but he is a tool of the World Economic Forum and head of a government that has already proven itself willing to burn down its own house for the sake of ideology, so Canada needs our prayers.  We will see if Justine is prepared to call out the military to deal with the Freedom Convoy.  Then the big story will be whether or not the army and the police are willing to wage war on their own people.
Posted by Anita Moore at 11:32