What the World Needs Is More Catholic Triumphalism 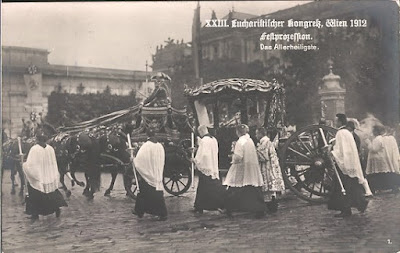 On Sunday, the feast of Christ the King, I woke up really early and decided to go to the early Mass at the SSPX chapel, a 45-minute drive by freeway.  So I dragged myself out of bed and hurriedly got ready and got on the road.  I arrived about 10 minutes to 8:00, thinking I was golden, time-wise.
Only to find that Father was in the middle of his homily.  The early Mass, it turns out, starts not at 8:00, but at 7:30.  The next Mass is at 10:00.
So, there being nothing else for it if I was to fulfill my Sunday obligation, and being several dozen miles from home, and the vestibule being tiny, chairless and cold, and the basement being filled with doughnuts that I really didn’t need to be around, I went back out to the car to commune with St. Augustine’s The City of God, in which I have been re-discovering St. Augustine’s masterful and at times downright hysterical fisking of Roman polytheism.  It was in the car that I realized I had forgotten my purse at home.  What kind of a self-respecting, middle-aged woman forgets her purse at home?
But I was to make another realization amid the follies and foibles of the morning, which was that, as always, God’s plans are far better than my own.  Because if I had carried out my original plan, and not been at the 10:00 Mass, I would have missed the Eucharistic procession at the end of Mass, replete with canopy, incense, candles, a well-used and possibly rescued yet lovely processional crucifix, an army of altar boys, and the singing of hymns.  I got to walk right behind the canopy, and thought, how fortunate the people living along the processional route, where Jesus in the Eucharist processed with His entourage, right out in the middle of the street, just as if He owned the place (and I rather think He does).  I would love to have the Prince of Peace marching down my street in these troubled times, reclaiming the neighborhood for Himself, casting a glance upon my home and sending His peace and blessings upon it.  Was there anyone along the streets we passed down who believed that this was happening to them?  Then, the circuit walked, back to the chapel for the public recitation of the Consecration of the Human Race to the Sacred Heart, and Benediction of the Blessed Sacrament.
Why on earth did the Catholic Church ever give up Eucharistic processions?  What has aggiornamento given us in their place, and what good has it done us?  As far as I can see, all we’ve done by hiding away the Blessed Sacrament — even from the faithful, inside our own churches, where the tabernacle is no longer front and center — is to cede territory to the enemy.  Our pusillanimity has culminated in the wholesale capitulation of the hierarchy of the Church to her enemies in secular governments before they even made a move, ending public Masses, depriving the faithful of the Sacraments and locking up churches.  All we accomplished when we decided to stop being “triumphalist” was to leave ourselves defenseless.
If you ask me, for the heartening of the faithful and the dismaying of our enemies, what the world could really use right now is a heaping plateful of old-style, pre-failed-aggiornamento Catholic triumphalism.  Since Christ is our King, and He has already conquered, we really have no excuse for anything else.
Posted by Anita Moore at 14:15