Thoughts on the SSPX 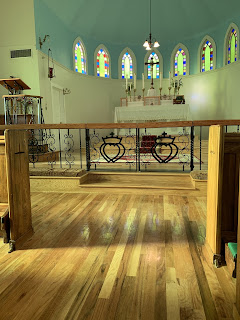 The subject of the priestly Society of St. Pius X has been coming up a lot lately in Catholic circles, possibly because of (a) the role they have played during the present crisis, and (b) the distress that many Catholics feel over the closures of churches, and over bishops using the coronapanic as the occasion to try to quash traditional practices like Communion on the tongue.  The SSPX has some very vociferous critics, particularly among some professional Catholic internet wonks.  I myself have been very critical of the Society in the past, and in this space, because their dealings with Rome seemed to me fraught with arrogance, and because I felt that, by retreating to their mountain fastnesses outside the regular structure of the Church, they were leaving me and others like me by ourselves, to foot it as best we can in a modernist environment.  I also avoided their chapels for years and years, despite my great desire for the traditional Mass, because of their irregular situation.  But now, amid the crises of our times, I have revisited my opinions about the SSPX.  Herewith my thoughts on the Society of St. Pius X, for what they are worth, and in which there is probably something to displease people from every point on the Catholic continuum, from CINOs to ueber-traditionalists.

In the interests of full disclosure, I have to admit to my own motives in this area.  I have come to love the traditional Mass, and have long wished to attend it exclusively, though I live in a diocese where, until a year ago, there was no parish within 300 miles that had the traditional Mass at all.  There is still no local parish that has it every Sunday.  Yet ever since I discovered the traditional Mass, the Novus Ordo has become increasingly painful to attend.  Modernism is in the ascendancy, and traditional-minded priests are marginalized and have little influence.  The situation has only gotten worse with the coronapanic, in which the opportunity has been taken to try to purge the Novus Ordo Mass of traditional practices such as Communion on the tongue and Communion on one’s knees.  Mother Angelica aptly described this state of affairs as “electric church”: every time you go, you get a shock.  I have had enough of the shocks.  There is an SSPX chapel less than an hour’s drive from home, and I could no longer come up with any good reasons not to go there when there is no traditional Mass at a regular parish.

I am not a canon lawyer, and so I do not pretend completely to understand the SSPX’s very messy and very complicated canonical status, which they admit is complicated and irregular.  But I think I understand enough about them now for my own purposes.  Although ‘90s talking points persist, and people constantly cite to them without taking into account later events, the evidence seems to weigh against the Society’s being schismatic.  Since 1988, the hierarchy, and particularly the pontifical commission Ecclesia Dei (whose functions have now been transferred to the Congregation for the Doctrine of the Faith), has softened its position on the SSPX.  Catholics are allowed to fulfill their Sunday obligations at SSPX Masses, make contributions to the SSPX, and have their marriages witnessed and their sins forgiven by SSPX priests.  In fact, it must be the case that we can fulfill our Sunday obligation at the SSPX chapels even if we have other options: if there were really no other options, and the SSPX were really in schism, then the Sunday obligation would be impossible to fulfill and therefore non-existent.  SSPX priests work with diocesan bishops and have dealings with diocesan tribunals.  Pope Francis, of all people, has broadened their faculties, or at least removed doubts about the existence or validity of their faculties.  That SSPX priests may receive faculties would seem to indicate that they are not suspended.  The SSPX priests have always prayed for the current Holy Father, including Pope Francis, by name, in their Masses, showing that they recognize the Pope’s authority.  The Society has received and cooperated with visitations from Rome.  This is all evidence that the Society is not a schismatic sect.

Secondly, I believe that Archbishop Lefebvre was not a lunatic, or a megalomaniac, but was in fact a very holy man, one of the great missionaries of the 20th century, who was not out to set up a new Church with himself or any successor of his as its head (as even traditionalists feared in 1988), but who tried to do the best he could in an agonizingly difficult situation.  He came from a family of devout Catholics: in particular, his mother was such a holy woman that, after her death, her pastor wrote a book about her.  It is possible for a holy man to fall, or for an evil man, like Maciel of the Legionaries of Christ, to masquerade as a holy man, pulling the wool even over the eyes of the reigning Pontiff.  Yet, when Archbishop Lefebvre rejected what passed for “reform” in the wake of Vatican II, and tried to cling to the traditions in which he had been brought up, a long and fruitful ministry should surely have earned him enough creds at least to be taken seriously and not dismissed out of hand as a schismatic.  Plus, events since 1988 would seem to support his position.  For one thing, we have the bad fruits that have abounded in the Church since the forced changes to the liturgy, to include a substantial percentage of Catholics disbelieving in the Real Presence of Jesus in the Eucharist, and a substantial number of bishops cooperating in the attempted suppression of the Catholic Church amid the global coronapanic.  For another, in his motu proprio, Summorum Pontificum, Pope Benedict XVI declared that the traditional Mass was never abrogated, and thus vindicated Archbishop Lefebvre’s belief that in adhering to the traditional Mass, he was acting within his rights.  That Archbishop Lefebvre and the other bishops whom he consecrated in 1988 were not validly excommunicated, as the Society maintains, is a position that deserves serious consideration and not an out-of-hand dismissal as a lunatic delusion.  Also, authorities that I trust, including but not limited to Bishop Athanasius Schneider and Father John Zuhlsdorf (see here, here and here) think well of the priests of the SSPX and say that we may attend their chapels with a clear conscience.  These men have had a lot more time than I have to become knowledgeable about the SSPX and its issues, and, as they have yet to steer me wrong, I am content to lean on their judgment on this subject.

Many objections to the SSPX center on their lay followers, and are based on the strange beliefs that some of them hold.  It is falsely assumed that all of them hold strange beliefs.  First of all, the lay people who attend SSPX Masses are not themselves members of the SSPX, so that, even if they hold strange beliefs, they do not speak for the Society, and it should not be presumed that these beliefs were taught to them by the Society.  Secondly, it must be remembered that no sector of the Church in our time is free from erroneous thinking, and that this can be found even in enclaves of traditionalism like SSPX chapels.  After all, the men who came up with the modernist heresy in the first place lived out their lives in a time when there was no Novus Ordo, and the only form of the Roman Rite was the one we now call the Extraordinary Form.  Will you find that some people in the pews at the SSPX chapels believe the Novus Ordo is per se invalid?  Yes.  Will you find sedevacantists?  Yes.  Will you find that some think those who attend the “Novus Ordo Church” are not real Catholics?  Yes.  These lay folks are wrong, and, by the way, also opposed to what the SSPX holds on each of these points.  But if you worry about associating with people who hold errors, consider that the average regular parish is by no means an error-free zone.  If you go to the average regular parish, will you find people who believe the traditional Mass is an evil that needs to be eradicated?  Yes.  Will you find people who think the Eucharist is only a symbol?  Yes.  Will you find people who think contraception is virtuous?  Yes.  You will also find people who scorn traditional devotions, support pro-abortion politicians, think it is wrong to deny Communion to public sinners, think women should be priests, and believe it is un-Christian not to allow persons of the same sex to attempt marriage with each other.  You will not only find people in the pews who believe these things, you will find priests and bishops who believe them, and who think they are the True Catholics, and that anyone who disagrees with them is a reprobate.

Finally, it is worth taking note of the Society’s performance during the coronapanic, which has done so much to expose everyone’s true priorities, clergy and laity alike.  While millions of Catholics have been locked out of their churches, and denied the Sacraments, the SSPX has doubled and trebled down on providing the Mass and the Sacraments to as many people as possible.  Most SSPX chapels are served by single priests who do not live local and have to travel long distances every week, yet they have increased the number of Masses they offer.  The SSPX chapel near me has gone from offering one Mass on Sundays to three.  It is even offering Saturday Mass in the evening, even though the traditional form of the Roman Rite admits of no Sunday Mass on Saturday, and uses the propers for Sunday only on Sunday.  (This, by the way, is an example of the SSPX following the universal legislation of the Church, even though it deplores the Saturday vigil Mass practice.)  The chapel shut down public Mass when the civil authorities initiated lockdown, but re-established it at the earliest possible opportunity.  Other SSPX chapels elsewhere continued to offer public Masses even after local bishops shut it down, where not prevented by the civil authorities.  This demonstration of the Society’s priorities during the current crisis deserves serious consideration.

I hope that one day, the Society’s canonical status will be straightened out.  That it is canonically irregular is not a plus.  Yet it may be providential at this moment, when so many bishops have proven untrustworthy and willing to exercise raw power beyond their authority, that the Society priests are, by reason of their status, beyond the reach of those bishops.  It also seems providential that there is within the Church a society of priests that is uncompromising in its refusal to offer the Novus Ordo, which they hold to be deeply flawed and a danger to the faith (though not invalid).  The SSPX, being made up of men who are sinners, is not perfect, but it is among those groups of traditionalist priests who provide an oasis here and there in the howling desert of modernism that is our world.