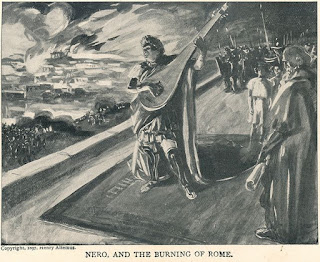 Comes the news that Pope Francis is forming yet another commission to study the question of female deacons.

Millions of children are being destroyed in their mothers' wombs every year.  A post-Christian world is trying to redefine marriage and even obliterate the whole concept of male and female.  Atheistic secularism, hostile to Christianity, is the predominant world view.  A small minority of leftist elites is out to destroy Western culture and concentrate as much power as possible into their own hands.  The Catholic Church in China has been sold out to the communists.  Idols have been worshiped in the heart of Christendom on earth, in the presence and with the apparent approval of the Pope himself.  Sexual abusers have proliferated within the Catholic priesthood and episcopate.  And now, we're in the middle of a worldwide crisis where some people are getting sick and dying; many more are losing their livelihoods because of quarantines and the shutting down of "non-essential" services; and Catholics all over the world cannot receive the Sacraments or even pray in their churches.  Some bishops are going as far as to try to forbid priests to administer the Sacrament of Extreme Unction.  Hospitals are denying the dying access to priests.

And this is the time the hierarchy decides to fiddle with the impossible and futile project of ordaining women to the diaconate.

Decades of sissified liturgy, designed to make us comfortable and complacent and flabby rather than zealous for God and for souls, has produced Catholics -- and therefore priests and bishops -- who do not have a supernatural outlook.  The "spirit of Vatican II" church that for decades has pushed the need for the Church to be "relevant" to modern man has succeeded only in making itself irrelevant to real people with real trials and tribulations.

What an indictment of the modernist experiment within the Church.
Posted by Anita Moore at 10:07