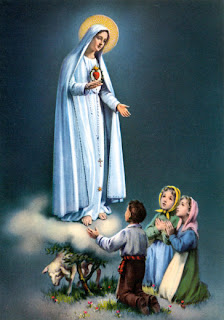 "She will be in purgatory until the end of the world."  (It seems to me that she was between 18 and 20 years of age.)

If this young girl from rural Portugal, a place where the faith was still strong, had racked up enough offenses to merit purgatory until the end of time, what is to become of us in this time of weakened faith, with vastly greater opportunities for sinning and a culture that encourages us to yield to temptation rather than fight it?  Lucia continues:

Heaven was not idle.  The campaign had begun.

And today, May 13, 2017, the Church has confirmed the truth of another of Our Lady's promises at Fatima with the canonization of Francisco and Jacinta.  St. Jacinta is now the youngest person ever to be declared a saint based on heroic virtue.

St. Francisco and St. Jacinta, pray for us.
Posted by Anita Moore at 00:00

Email ThisBlogThis!Share to TwitterShare to FacebookShare to Pinterest
Victory Topic(s): Centenary of Fatima