The Problem of Evil 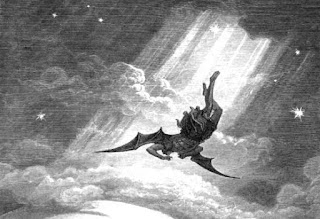 A lot of the news stories out of the U.K. about the terrorist attack at the Palace of Westminster in London this past week describe the perp in mental health terms, like "sick" and "maniac."  Despite the fact that ISIS has taken responsibility for this attack, a Telegraph story tracing the perp's path from popular, sporty schoolboy, through a life of hooliganism, to his murderous rampage at Parliament Square, suggests that racism is to blame:

Masood, may have eventually snapped because of racism in his village leading him to slash the face of a cafe owner.

It is thought he may have then been radicalised while in jail, eventually leading to his involvement in terrorism.

Set to one side the Telegraph's failure to make clear how the young Masood (then named Adrian Ajao) could at one and the same time have been very popular and well-liked by everybody, as his old schoolmate describes him, and the victim of such racism as could reasonably be expected to provoke him to commit the crime of mayhem against a cafe owner.  The two elephants in the room here are (1) the deadly ideology of radical Islamism, to which the West has recklessly opened itself up, and (2) the responsibility of human beings, rational by nature, for their own choice to do evil.  It is with Elephant Number Two that we are primarily concerned here.


We pride ourselves, in our rationalistic age, on our "scientific" and "logical" approach to the world; but in fact, rationalism is a creed whose adherents are every bit as rigid, inflexible, unseeing and hide-bound as they accuse Christians of being.  Rationalists ignore all evidence of any realities over and above nature and stubbornly insist that such do not exist.  They also ignore all evidence contrary to their beliefs that Man is a mere intelligent chunk of meat, and that consciousness is a mere concatenation of chemical reactions, and that humanity is therefore infinitely malleable according to its own whims.  This means that there is really no such thing as evil, let alone consequences for immoral behavior.  This idea that nothing has moral significance is really useful for anyone with an attachment to a vice that they don't want to give up, but when it comes to dealing with being on the receiving end of someone else's vice, its bankruptcy is -- or should be -- apparent.
The reality is that there are in the world evil people, and they freely choose to do evil things.  Not everyone who commits acts of horrific violence is insane.  Many are in full possession of their faculties and have deliberately chosen to do what they are doing.  The more they do evil things, the more inured to them they become -- like, for instance, the Parliament Square perp with his history of violent crimes -- and the easier it becomes.  As long as we take the position that every evildoer is necessarily crazy, we will fail to meet reality head-on.  We will continue to fail with the clinical approach to evil, treating it as a disease.  We dehumanize villains by denying their responsibility, because we cannot do this without also denying their rational nature and their free will.  Worst of all, we help lock them into their path to damnation, giving them ready-made excuses to stay right where they are, and go on doing what they are doing, and never even think about repentance and conversion.

There is in fact a system in the world that has proven highly effective in dealing with the problem of evil -- a system founded more than two thousand years ago by a Middle Eastern carpenter's Son, building upon a fisherman.  And it's the one thing that so many are completely unwilling to try.
Posted by Anita Moore at 19:01