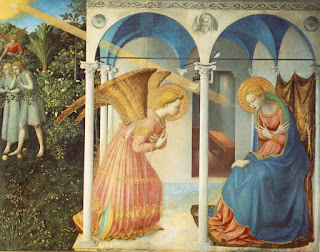 At the moment this post went up, Spring began.  At 04:29 Mountain Daylight Time, the sun crossed the celestial equator in its apparent path northward in our sky.  At that moment, the plane of Earth's equator passed through the center of the sun, and the sun was exactly overhead of the equator.  Today we have equal periods of daylight and nighttime -- hence the name "equinox."

Note how the changes in season coincide with the great feasts of Christianity.  On March 25th, the beginning of spring, we celebrate the Feast of the Annunciation, when the Word was made flesh and broke the winter of hell's dominion on earth.  Christ is also believed to have been crucified on March 25th, the same day as His Conception, so the beginning of spring also coincides with the opening of heaven's gates, previously closed by sin, and the Resurrection, when Christ conquered death.  June 25th, when the days begin to grow short, coincides with the nativity of John the Baptist, the Savior's forerunner and herald, who said that he must decrease while Christ increased -- just as daylight begins to increase with the Nativity of Jesus on December 25th.  As for September 25th, perhaps that change of season, which marks the harvest, stands for the harvest of souls, the wheat gathered into the Master's barn at the end of time.

I can almost hear the groans and tongue-clicking from persons steeped in the idiotic rationalism of our day.  No, Christians didn't make this stuff up.  Julius Caesar, who gave the world the Julian calendar, was not the pagan tool of a cabal of proto-Christians who were just waiting for the right moment to spring upon the world a new-fangled religion that would incite bloody persecutions.  Nor are we filling in the blanks with imaginative mummery just to satisfy our irrational urge for spirituality and add a little color to gray, prosaic reality.  We humans are just not smart enough to come up with these things on our own.  Only God is smart enough; though He does give us enough wits to take notice of the symbolism, and the truths it points to.
Posted by Anita Moore at 04:29