The Evil of "Inculturation" 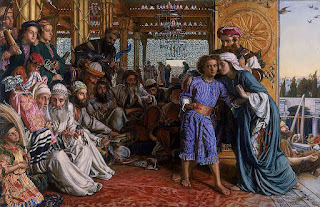 But in the Incarnation, God entered history in the flesh and made Himself accessible to our senses.  Luke's Gospel carefully spells out for us the time and place when this happened, and under which temporal rulers, and in what cultural context -- precisely so that we understand and take to heart the fact that Salvation occupied actual moments in the history of the world.  True, the artists of different nations have always felt free to portray Jesus and His mother with various ethnic features and in various costumes; but it is another matter entirely to try to shape the Christian faith itself according to the molds of cultural idiosyncrasies.

And that is where "inculturation" becomes an evil, in the service of the heresy of Christianity as a mere "idea."  Fr. John Hunwicke puts it best in his musings on the intimate connection between the Christian faith and the realities of life in the Mediterranean basin (emphases in original):

But more insidious still is the idea that the principle of inculturation could be applied to the elements used in the Christian sacraments. I have known suggestions that to use bread made from something other than wheat, alcohol produced not from grapes, and the oil of vegetables other than olives, would 'affirm' cultures which do not find their origins in the Mediterranean basin. This seems to be based on the notion that Christianity is an idea; and ideas can, in different cultures, be garbed in different clothes. That is what is the basic heresy. Because Christianity is not an idea. It is a person, a God who took flesh - a particular flesh - from a particular Girl in a particular country in a particular culture, and in that flesh died on a Cross made from a particular Tree after he had, on a particular evening, given himself to his friends under the outer appearances of a loaf and a cupful of wine. This particularity and this materiality, this rootedness, is Christianity. That is why the Gnostics were not Christians, and why Matthew Fox is not a Christian. And the Matter of the Sacraments is rooted in the particularity of that Incarnation and its culture.

Without the Corn, the Wine, and the Oil, nulla salus.