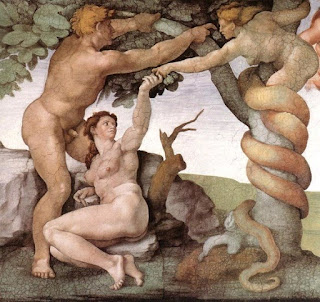 Bruce Jenner is now officially pretending to be a woman, and we are advised from nearly every quarter that he deserves respect and support and plaudits for this "courageous" and "difficult" decision to pursue his "right" to be whatever he wants to be.

This sort of thing is possible only in a world that rejects (a) God, and (b) objective reality.  The recognition of an all-knowing, all-powerful, all-good and loving God necessarily rules out the idea that a person can be a woman "trapped in a man's body" and vice versa.  God cannot make mistakes or fail to carry out His ordaining will.  And contrary to the fevered imaginings of the so-called Enlightenment philosophers, it is possible to perceive and grasp reality, and to distinguish it from that which is unreal.  Sex (not "gender": funny how, in an age saturated with sex, we cavil at using the word) is inescapable.  The sex chromosomes, which inhabit every single cell in the human body, are inescapable.  Persons who think they can create their own reality should think about trying to apply that principle to their checking accounts.  Go ahead and decide you're a billionaire, and then start trying to spend accordingly.  See where that gets you.

With God and objective reality out of the picture, no one is safe, not even from himself.  Now anything is not only possible, but permissible.  The willingness to traverse boundaries previously understood as being impassible marks the death of human dignity.  The body is nothing more than fodder for experimentation, to be used and abused as we please.  We are just human chattels.  We are reverting back to the slavery that our forebears fought and labored so hard to abolish, only this time it will be without even the minimal protection of the law.  The idea of the integrity of the human person is meaningless.

And since we need not respect our own integrity, others need not respect it either.  Maybe someone else should be able to decide for us that we should be the opposite sex.  That day in fact has already come: already we are seeing stories about parents putting their children -- even five-year-olds! -- through this process, and attributing it to the child's "choice."  Is it not the height of immorality to hold a child -- manifestly too immature to make life-changing decisions, possibly not even having yet attained the use of reason -- to a whim?  What if the child decides to pretend to be a dog or a cat?  Should he be held to that, even to the extent of being surgically mutilated to look like a dog or a cat?  Where are the laws to protect children from this extreme form of abuse inflicted on them by those whose duty it is to love and care for them?  In the end, where will we get laws to protect adults from this kind of treatment?

Bruce Jenner is not a woman, and he is not a hero for trying to live like one.  He is properly an object of pity, not only on account of his deep disorder but also because he is surrounded by people who do not love him enough to uphold the truth to his face.  And the truth is this.  God made him a man, on purpose, and it is His will that Bruce live like the man he was made to be.  He can put on women's clothes; he can fill himself full of hormones; he can go through the "counseling"; he can pay some quack tens of thousands of dollars to mutilate his body; he can even bully the rest of the world into playing along with his fantasy.  But he can never, ever make himself into something that he is not, much less find happiness in the effort.
Posted by Anita Moore at 19:17