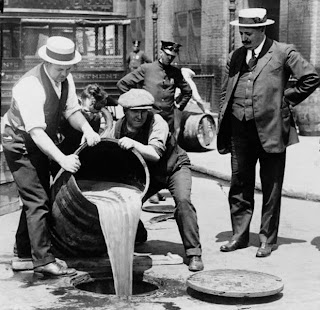 Prohibition is an awful flop.
We like it.
It can't stop what it's meant to stop.
We like it.
It's left a trail of graft and slime,
It's filled our land with vice and crime,
It don't prohibit worth a dime.
Nevertheless, we're for it.
Franklin P. Adams

It has just been brought to my attention that it was 80 years ago today that the 18th Amendment to the U.S. Constitution -- Prohibition -- was repealed.  Now it isn't every day that an injustice gets remedied in our corrupt world, so when one is, that is a moment to celebrate and commemorate.

Yes, Prohibition was an injustice.  It was an unjust burden on individual liberty to outlaw drinking for all, even in moderation, because of the relative few who abused drink.  Deliberate drunkenness is a serious sin, because it deprives us of our capacity to reason; but there is nothing, however legitimate, that can't be abused.  Liberty itself can be abused, and is, every minute of every day; but that would not justify locking everybody up on the off-chance.  Besides, despite the religious justifications advanced for Prohibition, the absolute prohibition of alcohol is contrary to Scripture.  Our Lord Himself turned water into wine at the wedding at Cana: not grape juice, but actual wine, with alcohol and everything.  (Question: at the time of Christ, was there such a thing as non-fermenting grape juice?)  He also drank wine Himself -- for which the Pharisees criticized him (Matthew 11:19).  And St. Paul advises his brother bishop, Timothy, to take wine for his health (1 Timothy 5:23).

Prohibition was an outstanding example of America's curious ideas about morality.  In his essay "On American Morals," G.K. Chesterton reflects on an article by an American writer calling for the abolition of what she called "righteousness," on the grounds that "righteousness" was incompatible with reality.  He sums up the American attitude:

The standard of abstract right and wrong apparently is this. That a girl by smoking a cigarette makes herself one of the company of the fiends of hell. That such an action is much the same as that of a sexual vampire. That a young man who continues to drink fermented liquor must necessarily be "evil" and must deny the very existence of any difference between right and wrong. That is the "standard of abstract right and wrong" that is apparently taught in the American home. And it is perfectly obvious, on the face of it, that it is not a standard of abstract right or wrong at all. That is exactly what it is not. That is the very last thing any clear-headed person would call it. It is not a standard; it is not abstract; it has not the vaguest notion of what is meant by right and wrong. It is a chaos of social and sentimental accidents and associations, some of them snobbish, all of them provincial, but, above all, nearly all of them concrete and connected with a materialistic prejudice against particular materials. To have a horror of tobacco is not to have an abstract standard of right; but exactly the opposite. It is to have no standard of right whatever; and to make certain local likes and dislikes as a substitute. We need not be very surprised if the young man repudiates these meaningless vetoes as soon as he can; but if he thinks he is repudiating morality, he must be almost as muddle-headed as his father. And yet the writer in question calmly proposes that we should abolish all ideas of right and wrong, and abandon the whole human conception of a standard of abstract justice, because a boy in Boston cannot be induced to think that a nice girl is a devil when she smokes a cigarette.

This muddled thinking persists to this day.  There are still many who look upon even the moderate use of alcohol and tobacco as vices, in a country that countenances, among other things, promiscuity, sexual deviancy, abortion and euthanasia.  Indeed, it is practically a vice to regard a vice as a vice.  We really do not have a standard of right or wrong.  William F. Buckley, Jr. once commented: "You can take the most disorderly, self-indulgent twenty-one-year-old sailing; he may smoke pot in his cabin while fornicating, but he will not throw the trash overboard.  How come?"  It is a species of the "formless fanaticism" that Chesterton called the great danger of the American temperament.