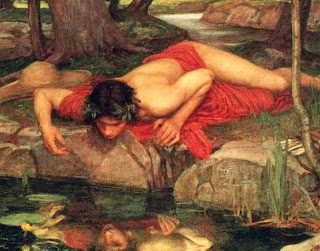 Once again, Sunday Mass featured a visiting priest who evidently thinks it's All About Him. Today's narcissism took the form of constantly interrupting the Mass -- even the Canon -- in order to insert commentaries.  Can somebody point out where in the Missal it says to do that?  Must the priest's private views, which I did not come to church to hear, constantly intrude on the Mass, which I did come to hear?  Why can't we just have -- the Mass?

The incessant attention-seeking from today's celebrant put me in mind of a religious sister I heard speaking once, a high-ranking official in the diocese at the time, who was publicly lamenting the fact that the Church contumaciously refuses to ordain women (read: her) as priests.  It pained her so much, she said, that she could only do so much before people had to turn away from her and seek out a priest.  In other words, she wanted to be a priestess because she wanted (a) power, and (b) to be the center of attention.  This distorted view of the priesthood is wholly foreign to the mindset of a man with a legitimate vocation, who understand himself to be called to a life of service and self-sacrifice.

Then I thought: after decades of attending Holy Mass under the guise of a fourth-rate vaudeville act, can the wymynpriest crowd really be blamed for thinking the priesthood is the key to satisfying their cravings for the spotlight?  Have not priests themselves fostered this gross misconception; and is this not due in large part to what has been done to the liturgy?  Turn the priest toward the congregation and hook him up to a microphone, and of course he will think he's supposed to play to the crowd, and begin acting accordingly.  Next thing you know, Holy Mass is transformed from the highest act of worship to a show that the priest feels the need constantly to try to steal.  And just to make sure of an adoring crowd, the people in the pews are strictly regimented, while he gets away with doing whatever he wants, whatever the Missal may say -- a phenomenon we have reflected on in this space before.  Was the women's ordination movement as noisy and pestiferous before the changes to the Mass and the ensuing abuses as it is now?

The abuses in the liturgy that are now so widespread are themselves a symptom of deeper problems in the Church; but they are the proximate cause of doctrinal derailments, which foster chaos and moral impotence that ripple out into the world at large.  No wonder it is said that to save the liturgy is to save the world.
Posted by Anita Moore at 19:42