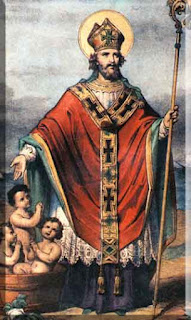 In these evil days, when the United States and Europe have allowed themselves to be seduced by socialism and hedonism, we should invoke St. Nicholas of Myra.  We face hard times, and we shall not make it through them without help from heaven.  This was what Nicholas brought even during his life on earth; how much more powerful he must be from heaven.

Nicholas was a great worker of miracles: calming storms on the sea; curing the sick; relieving famines.  He saved innocents from being executed.  He not only converted many sinners; he rescued people from circumstances that would have led them to sin.  On one occasion, he provided dowries for three girls whose father, stricken with poverty, was about to sell them into prostitution.  We should pray for his help in these hard economic times, and ask him to obtain for us the means of providing for our needs and the needs of the poor.  We should also ask him to obtain the grace we need to avoid sinning in the name of economic necessity.

St. Nicholas even raised the dead.  The picture above shows the miracle of the three pickled boys.  An evil shopkeeper murdered, chopped up and pickled three boys; hearing of this disgusting deed, Nicholas brought the boys back to life, safe and whole, by his prayers.  Today, millions upon millions of babies are chopped up in their mothers' wombs.  We should invoke Nicholas, the patron of children, particularly for the protection of the unborn, and for the eradication of abortion and contraception from the face of the earth.  We should also invoke him for the resurrection of all who are dead in sin, and the grace for them to amend their lives permanently.

St. Nicholas, gentle and generous with children and sinners, was ruthless in the fight against false religion.  He personally destroyed sites dedicated to the worship of pagan gods.  He is famous for having punched the arch-heretic Arius at the First Ecumenical Council of Nicaea.  Arius denied that Jesus was God, and spawned a heretical movement that all but destroyed the Church, so he deserved a lot more than just a sock in the kisser.  We should invoke St. Nicholas for the crushing defeat of all heresies and all the deadly ideologies that have cost the lives of millions over the last century.

St. Nicholas of Myra, Archbishop, was not merely Santa Claus.  He was indeed a great giver of gifts, but these gifts, whether spiritual or temporal, were always directed toward salvation.  We should ask him to obtain for us all those gifts that we need, especially those we don't know we need.  St. Nicholas of Myra, pray for us. 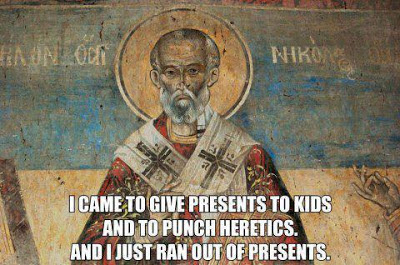