And Then That Was It 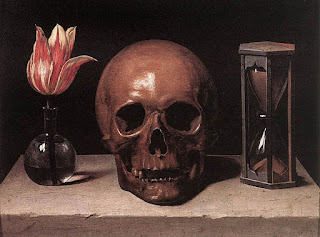 The wife of the accused in a local murder trial has taken the stand.  Her husband is accused of killing her boss.  The wife testified that she and the boss, a married man with several small children, had been having an affair for several months, and -- the detail that haunts -- had had sex right before going to the parking lot where he met his death.

So, almost the very last thing this man ever did on this earth was to commit adultery.

And then that was it.

No time whatsoever.  Only death, and judgment.  What lay beyond that, only God knows.

We know not the day nor the hour.

O time despised during life! you will be ardently desired by worldlings at the hour of death.  They will then wish for another year, another month, another day; but they will not obtain it: they will then be told that time shall be no longer.  How much would they then pay for another week, or another day, to settle the accounts of their conscience?  To obtain a single hour, they would, says St. Laurence Justinian, give all their wealth and worldly possessions.  But this hour shall not be given.