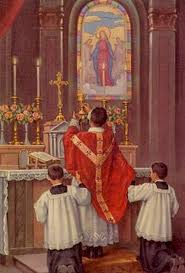 At this moment, the little chant schola I belong to is working on the Mass propers for the feast of Bl. Margaret of Castello, the patroness of my lay Dominican chapter.  I don't believe there is a Mass for her feast in the Roman Rite, but there is in the Dominican Rite; and the plan is to have a votive Mass in her honor the next time the inimitable Fr. Vincent Kelber, O.P., our religious assistant and Dominican Rite expert, comes to visit.

These propers are no easy proposition.  Like chant Mass propers in the Roman Rite, the Bl. Margaret propers are quite intricate; the score to the Responsorium (the Dominican Rite's term for the Gradual) particularly resembles a seven-lane ant highway.  But these chants are not dissimilar to those sung on any Sunday or feast day in the Extraordinary Form of the Roman Rite: thumb through a copy of the Liber Usualis, or look at the sacred music files on the Institute of Christ the King website, and it becomes clear that music of this caliber is business as usual in the older forms of Mass.  Within living memory, there must have been many places where chants like these were sung every week.  Certainly, the Liber Usualis is organized in such a way as to make clear that a high degree of knowledge is presumed on the part of those who use it.

Sadly, such a presumption can no longer be made.  Music in the same league as Bl. Margaret's propers are not business as usual, or even business as unusual, in many places today.  Those of us who are trying to bring back traditional worship, and who have no teachers except what we can find in books or on the internet, are like kindergartners trying to learn calculus.  But what is even sadder is that so many people are happy about this state of affairs.

Let these incredible and appalling facts sink in.  We have fallen from excellence in our worship.  That, in itself, is bad enough.  But it gets worse.  Not only have we fallen from excellence; we do not in the least regret having done so.  Not only do we not regret it; we rejoice in it.  Not only do we rejoice in it; we even go so far as to consider ourselves morally superior to those for whom the excellence we have lost was a way of life.  We do this instinctively -- even those who have never attended any Mass according to the rites of 1962, and therefore have no idea what it is they are so glad to be rid of.

In short, by having cast off the high and the excellent, we think we have embraced humility and cast off vanity, pride and conceit.  But it is precisely vanity, pride and conceit that we have embraced, and humility that we have cast off, blinding ourselves to the true, the good and the beautiful; and, being thus puffed up and blinded, we find ourselves horribly disadvantaged in the face of the Enemy whose armies, seeing our weakness, advance rapidly and relentlessly upon us.

This, surely, is why Pope Benedict has taken the pre-conciliar rites -- including the Dominican Rite -- out of mothballs and made a gift of them, not only to those who were devoted to them before the changes of Paul VI, but to all Catholics.  We need to recover our lost weapons, and rearm for battle.  And this is why the little schola -- which has never done a sung Mass in the Dominican Rite -- will, with the help of God's grace, struggle on stubbornly to master the propers for our little patroness, and hopefully win for ourselves and those who attend this Mass a share in the virtues that brought her safely through a lifetime of tribulations.
Posted by Anita Moore at 19:44