Holy Saturday: In Hell Itself 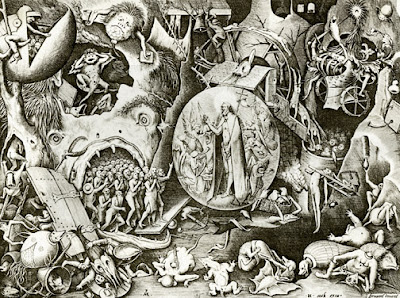 Today Supertradmum at Etheldreda's Place reminds us that the Harrowing of Hell is probably the most ignored of the creedal doctrines.  Certainly my own memory can lay hold of no homilies I have ever heard on the subject, apart from the ancient, anonymous sermon that forms the second reading for today's Office of Readings (Matins) in the revised Breviary.   Yet as Catholics, we are bound to believe that sin shut the gates of heaven against the souls of men; that it was only Christ's Passion and Death on the Cross that opened heaven; that until then, the souls of the Just were imprisoned; and that, after His death, Christ liberated these souls.  Perhaps one reason we do not devote more time to considering this stupendous event is because it has been obscured by the modern obsession with avoiding any and all mention of Hell: its edge has been blunted by the milquetoast English rendition of the event as "He descended to the dead."  This bland, pedestrian translation fails to confront us with the startling fact of Christ in Hell; we are not inspired to inquire further into its meaning.  It seems obvious that the Son of God is among the dead, having died on the Cross; but how can He, pure and sinless, be in Hell, and why?

First of all, what is the Hell to which Christ descends?  We think primarily of the Hell of the damned, from which there is no escape, and from whose punishments there is no reprieve.  Before the coming of Christ, sin barred the gates of heaven to men.  The souls of the Just could not get into heaven until after Jesus had sacrificed Himself to pay the penalty for our sins.  As St. Thomas Aquinas says in the Summa Thelogica:


[T]hrough Christ's Passion the human race was delivered not only from sin, but also from the debt of its penalty.... Now men were held fast by the debt of punishment in two ways: first of all for actual sin which each had committed personally: secondly, for the sin of the whole human race, which each one in his origin contracts from our first parent, as stated in Romans 5 of which sin the penalty is the death of the body as well as exclusion from glory, as is evident from Genesis 2 and 3: because God cast out man from paradise after sin, having beforehand threatened him with death should he sin.

So what happened to all the good people who lived before Jesus' time, and died without ever having the opportunity to believe in Him or receive the Sacraments?  They dwelt in a place of waiting -- variously called, among other things, the Bosom of Abraham, or the Limbo of the Fathers, or the Limbo of Hell.  There they did not suffer the torments of the damned, but they did suffer privation.  Aquinas elucidates:


After death men's souls cannot find rest save by the merit of faith, because "he that cometh to God must believe" (Hebrews 11:6). Now the first example of faith was given to men in the person of Abraham, who was the first to sever himself from the body of unbelievers, and to receive a special sign of faith: for which reason "the place of rest given to men after death is called Abraham's bosom," as Augustine declares (Gen. ad lit. xii). But the souls of the saints have not at all times had the same rest after death; because, since Christ's coming they have had complete rest through enjoying the vision of God, whereas before Christ's coming they had rest through being exempt from punishment, but their desire was not set at rest by their attaining their end. Consequently the state of the saints before Christ's coming may be considered both as regards the rest it afforded, and thus it is called Abraham's bosom, and as regards its lack of rest, and thus it is called the limbo of hell.

So, as Aquinas says, Directly Christ died His soul went down into hell, and bestowed the fruits of His Passion on the saints detained there; although they did not go out as long as Christ remained in hell, because His presence was part of the fulness of their glory.

We come to the reasons for the Harrowing of Hell, which we have already begun to touch on.  The Angelic Doctor gives three reasons why it was fitting for Christ to descend into Hell.  Firstly, to bear the penalty for sin -- namely, death of the body and descent into Hell -- in order to free us from penalty (though we are not yet delivered from the penalty of bodily death).  Secondly, to force Hell to disgorge its righteous captives.  And thirdly, to show forth His power and glory even in the domain of the devils.


This last point is worth lingering upon.  Because the wills of the damned are confirmed in evil at the moment of their deaths -- just as the wills of the righteous are confirmed in goodness and charity at the moment of their deaths -- Christ did not rescue any of the damned from Hell.  In His essence, He visited only the Limbo of the Fathers; but the effects of His power reached every part of Hell.  Aquinas:

A thing is said to be in a place in two ways. First of all, through its effect, and in this way Christ descended into each of the hells, but in different manner. For going down into the hell of the lost He wrought this effect, that by descending thither He put them to shame for their unbelief and wickedness: but to them who were detained in Purgatory He gave hope of attaining to glory: while upon the holy Fathers detained in hell solely on account of original sin, He shed the light of glory everlasting.

In another way a thing is said to be in a place through its essence: and in this way Christ's soul descended only into that part of hell wherein the just were detained. so that He visited them "in place," according to His soul, whom He visited "interiorly by grace," according to His Godhead. Accordingly, while remaining in one part of hell, He wrought this effect in a measure in every part of hell, just as while suffering in one part of the earth He delivered the whole world by His Passion.

He puts it briefly in another place thus:

When Christ descended into hell, all who were in any part of hell were visited in some respect: some to their consolation and deliverance, others, namely, the lost, to their shame and confusion.

With Christ's visitation, the spoliation of Hell was complete.  A final extract from the Angelical that is worth many hours of meditation (emphasis added):

When Christ descended into hell He delivered the saints who were there, not by leading them out at once from the confines of hell, but by enlightening them with the light of glory in hell itself.

Think of it.  Hell is the privation of God and His glory.  For the imprisoned elect who found themselves in the presence of the living God and beheld the light of His glory, Hell, in that moment, ceased to be Hell.  Hell was overthrown.


No wonder it is written in Philippians 2:10-11 "That in the name of Jesus every knee should bow, of those that are in heaven, on earth, and under the earth: And that every tongue should confess that the Lord Jesus Christ is in the glory of God the Father."
Posted by Anita Moore at 16:14