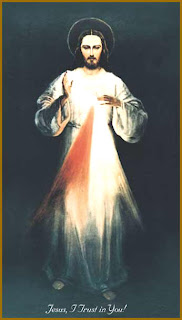 My daughter, tell the whole world about My Inconceivable Mercy. I desire that the Feast of Mercy be a refuge and shelter for all souls, and especially for poor sinners. On that day the very depths of My tender Mercy are open. I pour out a whole ocean of graces upon those souls who approach the fount of My Mercy.
Diary of St. Faustina

On April 15, 1912, the Divine Mercy reached even the doomed passengers of the "unsinkable" Titanic.  The ship failed to carry the necessary number of lifeboats, but God fitted her out with three lifeboats, each of which could carry to eternal life everyone who approached them: Fr. Joseph Benedikt Peruschitz, O.S.B., a German Benedictine on his way to work at a new monastic school in Minnesota; Fr. Juozas Montvila, a young Lithuanian priest on his way to take over a parish in America (the location is in dispute); and Fr. Thomas Byles, an English priest on his way to officiate at his brother's wedding in New York.  All of these priests refused seats on lifeboats, preferring to help the other passengers to safety, hear confessions, grant absolution, and prepare those who were to die to meet God.  When last seen, Fr. Byles was leading the doomed passengers in the Rosary.  How fitting that the last Masses these martyrs of charity celebrated was the Mass for Low Sunday -- what would later become today's Feast of Divine Mercy.

A religious on board the Titanic escaped via lifeboat -- the lifeboat of obedience.  Br. Francis Browne, S.J., boarded the ship at Southampton for Cobh, Ireland.  He fell in with some wealthy passengers who offered to pay his way to America.  When he wired his provincial for permission to continue on to the States, he received the terse reply: "Get off that ship."  Because he obeyed, Br. Browne was not aboard the Titanic during its fatal collision with the iceberg in the north Atlantic.  He went on to be ordained into the priesthood, and served as a military chaplain with Fr. Willie Doyle, S.J., the saintly Trench Priest of World War I, extending the Divine Mercy even into the hell of No Man's Land.  Fr. Browne died in 1960; to the end of his days he carried in his wallet the wireless message that had saved his life through religious obedience.