St. Antoninus of Florence, O.P.: Exactly What Is Needed, And Therefore Worth Reposting 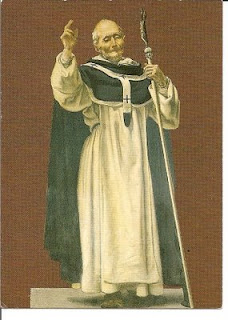 Antoninus of Florence, born in 1389, bore the marks of great piety and virtue from an early age.  While still a boy, he presented himself to the Friars Preachers in Fiesole and begged to receive the habit.  Because of his tender age and delicate constitution, the prior was reluctant to admit him, and told him that if he came back at the end of the year having memorized the Decretal of Gratian -- the then-existing body of canon law -- he would be admitted.  This seemed tantamount to an outright refusal, but Antoninus accomplished the task, and received the habit at the age of 16.

Antoninus' excellence in all the virtues, conscientiousness and prodigious intellect carried him to the highest levels in the Order, and eventually in the hierarchy of the Church.  In 1446, despite his entreaties to the contrary and attempts to escape, Pope Eugenius IV made him Archbishop of Florence, which the holy Dominican proceeded to deep-clean from top to bottom.  On May 2, 1459, Antoninus died at the age of 70.  He was canonized in 1523 by Pope Adrian VI, and in 1559, his body was found to be incorrupt.  The memorial of St. Antoninus is celebrated on May 10th on both the current and pre-conciliar calendars.

Prayer to St. Antoninus
(translated into English by Doug Sousa)

O Antoninus, Archbishop of Florence, in God's heaven you shine with the two-fold crown of bishop and doctor.  Illumine our way through this life and make our hearts invincible in temptation.  You who were called the "saint of good advice," guide us through the confusion of our thoughts and the rebellion of our will.

The poor called you "father," and in you found protection and help -- physical bread for their bodies and spiritual bread for their souls.  As the daily cares of this earthly life become increasingly burdensome, we turn to you who wisely pointed out the demands of social justice in the midst of difficult economic circumstances.  Obtain for us from God the freedom to serve him alone, to live in fraternal love, and to use the goods of the earth to seek the treasures of the life to come.  Amen.
Posted by Anita Moore at 23:31