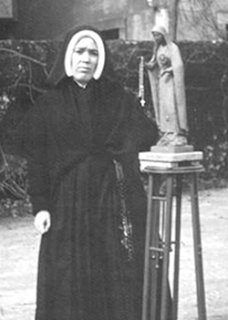 My good friend TH2, a devotee of Our Lady of Fatima, thoughtfully took time out  from battling the habitless hordes and keeping Mr. Scampers in line to respond at length to my post about the Secrets of Fatima, revealed to the children during the July 13th apparition.  He raises some serious questions about the secrets, about which there has been no shortage of controversy.  I think these questions are worth a post-long response, so here goes:

1. Why did Pope Benedict write a letter to Socci, thanking him for the "sentiments" of his book? Why is Cardinal Bertone, the Secretary of State, in an all out ideational war against Socci et al?

Here I must admit to gaps -- or, as William F. Buckley, Jr., would have said, lacunae -- in my knowledge.  I suspect I am going to have to break down and order Antonio Socci's book, which I confess to never having read.  I am not completely up on the feud between Socci and Cardinal Bertone, so I don't know the answer to the second question.  As to the first, I find a reference to this letter from the Pope to Socci in the Fatima Crusader, 86 at 42, 49, which is associated with the highly problematic Fr. Gruner, in an article by Socci.  He says that Pope Benedict thanked him for the "sentiments that inspired" his book, The Fourth Secret.  He implies that he is keeping that letter to himself, except for that one hint that he gives about its contents, so I don't know what the letter says.  (If you  have a source for the text, I will check it out.)  But if the Pope is thanking him for the sentiments behind the book, as distinguished from its theme or contents, I don't think that's necessarily an endorsement of the book itself.  In fact, based just on what I've seen so far -- which admittedly isn't much -- that could very well be a studied way of avoiding endorsing the contents.

2. To my understanding, Sister Lucia was the only religious in the world forbidden against speaking to outsiders re: Fatima unless permitted by the Vatican. Why was that?

It might have been to protect her from the importunities of curiosity seekers.  Recall that when Lucia left Aljustrel for the Dorothean convent in Spain, she was strictly enjoined never to mention Fatima.  Part of the reason for this was to give her a shot at having a normal life, which she could not have had if she had stayed at home.  Afterward, she never spoke or wrote about the apparitions except under obedience, and even then, she did so reluctantly.  Besides, you can't be a cloistered Carmelite nun with a string of visitors hanging on the bell; and in any case, I doubt she would have wanted to complain to outsiders about Vatican foot-dragging in the matter of the Blessed Mother's requests.  I think she would have viewed that as a failure of reverence and obedience.

3. Conversion of Russia Did Our Lady mean a rejection of Communism and a return to the Orthodox Church? But this would infer that the 1054 schism was valid, which is inconsistent with a return to unity with Peter in Rome. Then, did she mean that Russia was to become Catholic? Signs of this currently? Yet, Pope Benedict is now making inroads with the Orthodox. Or is this still many decades, centuries away? "God is not on our schedule" as you said.

We can only speculate on what the conversion of Russia would have entailed, and in what time frame, if we had promptly carried out Our Lady's wishes.   I bet it would have been more or less instantaneous.  But since we dinked around for several decades, we now have to live with the consequences of Russia's errors spread and entrenched throughout the world, so that we are presented with difficulties we would not otherwise have faced -- not the least of which was the rise of Soviet Russia as a superpower.  I suspect the conversion of Russia is now going to have to take place in steps, because of the damage that must now be undone.  I think it's safe to say that a necessary first step was the neutralizing of the immediate threat (as distinguished from the long-term threat) that Russia posed to world peace.  That certainly happened, and in a most astounding way: I'm betting you're old enough to remember the precipitous overthrow of the Soviet regime.  I wouldn't say Our Lady would endorse the schism you mention, but I don't think we can rule out that the Russian Orthodox Church has a role to play, especially in view of Pope Benedict's inroads.  (I don't think we would disagree in any case that the Russian Orthodox Church is orders of magnitude better than, and a huge step up from, atheistic Communism, though it should by no means be the final destination.)  As you point out, God's not on our timetable.

4. Spreading of Russia's Errors. Is the Marxist contagion still not infecting China, North Korea? Why did the 1989 student revolt in China fail when Communist governments elsewhere toppled so swiftly? Socialism - in its Gramscian form - seems to be gaining momentum in the West (e.g. Obama)?

No question about it: Marxism is still twitching.  The Chinese and the North Koreans are still enslaved; and, since the United States has failed to deserve to be spared the scourge of Marxism that has afflicted so many other nations, we now have it in power in Washington, D.C.  Yet no one can seriously argue that Marxism did not suffer a catastrophe of the first magnitude immediately on the heels of the 1984 act of consecration.  Nevertheless, there are still mop-up operations to be carried out, even after the enemy is defeated; there are still holdouts here and there, manned by soldiers ready to die rather than surrender.

As far as the gain in momentum of socialism in the west, I would chalk that up, not to the failure of the 1984 act of consecration to be efficacious, but to our own decadence.  We have  allowed ourselves to become mired in vice, and as a result, we have failed to take up the weapons we have been given to gain victory with.


5. Period of Peace in the World That is a hard one... If the fall of Communism was a sign of a valid consecration by the Pope, indicating the start of a period of peace, there has not been much peace since, especially since 9/11...."promises at Fatima were conditional", as you said.

This question is linked with the previous one.  The Fatima promises were conditional, and our failure to fulfill the necessary conditions has played its role.  Russia had had almost 70 years to spread her errors throughout the world before we made a move, by which point, as mentioned above, we were faced with almost insurmountable yet perfectly avoidable problems.  Now, I think we are going to have to wait for that period of peace, since now the mess will take longer to clean up.


One part at least of the Fatima message came through loud and clear: we must pray, do penance and amend our lives.  This part of the message, I think, is the most important part and will never cease to be relevant.


Yet it's the part that gets the least attention.
Posted by Anita Moore at 00:31