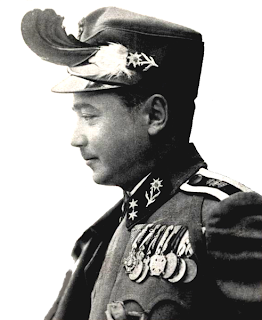 Chancellor Engelbert Dollfuss called himself the youngest (43) and the shortest (4'11) Chancellor in all of Europe.  A devout Catholic who found himself in a confused age when good people embraced one evil in order to counter another, Dollfuss was the only European head of state to actively and openly oppose Hitlerism in the 1930s.

In 1933, Dollfuss met Dietrich von Hildebrand, the great 20th-century Catholic philosopher, and agreed to provide financial backing for an anti-Nazi, anti-Communist magazine that Hildebrand wanted to start in order to combat the disastrous moral confusion of the day.  Determined to preserve the independence of Austria, Dollfuss took stern measures in the face of  Nazi and Communist attempts to take power.

Seventy-six years ago yesterday, as part of an attempted coup, Nazi assassins dressed as Austrian guards invaded the Chancery and shot Engelbert Dollfuss in the back.  Dollfuss lay in agony for seven hours, during which time the Nazis refused to bring him either a doctor or a priest.  The chancellor who spared not even his own life in the combat against the evil rampant in Europe breathed his last praying God to his murderers.
Posted by Anita Moore at 23:19