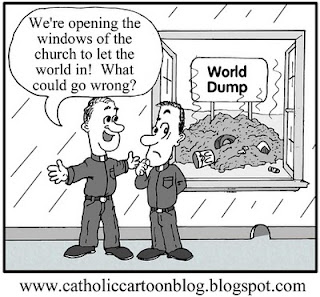 Every Lent, for the last several years, I am reminded why I don't like to go to the Stations of the Cross anymore at my local neighborhood churches.  When I was a kid, the Stations of the Cross  booklet that we always prayed out of at my parochial school was distinctly lacking in power and majesty; yet Stations was still an oasis of Catholic sanity in the howling desert of the Spirit of Vatican II.

Not anymore.  Now, instead of following Jesus on the Way of the Cross, we are to swing into lockstep with the revolution on the march.  An outfit called Center of Concern runs a website called Education for Justice, allegedly dedicated to advancing Catholic social teaching.  You have to be a paid subscriber to access most of the site's content (which seems to be almost devoid of anything having to do with a real and pressing matter of social justice, namely, abortion).  But if the "Peace Stations of the Cross" held at one of the local parishes last Friday is any indication, that money would be better spent on something more worthwhile, like say a five-day drug run.

Some samples of the Center for Concern's commie crappola and downright heresy masquerading as a legitimate Catholic devotion, ranging from the nonsensical to the overtly pagan:

Jesus knew in his own body the force of violence, the power of fear and the domination of those intent on destroying him.  All might, all evil, all hostility struck against him and he fell.  But he stood again, faced the power of violence, and absorbed it within himself.  Jesus' lifestyle of personal nonviolence was chosen long before he faced the cross and execution.  His first word, "repent," was the call to be nonviolent and obedient.

Every time we fall, giving in to hatred and revenge, we promise to rise again and recommit ourselves to the nonviolent Jesus.  We will strive to be peacemakers in our daily lives, offering an alternative to the violence that is so pervasive in our culture and world.

[Note the twisting and subversion of the well-known prayer:] We adore you, Christ, and we bless you.  By the power of your holy cross help us to change the world.

From the Fourth Station: Jesus Meets His Mother.  Mary, who never sinned, stands in solidarity with unrepentant and public sinners:

From the beginning Mary shared the fate of her child, including his call to prophecy, his rejection and sufferings.  She prayed his call to prophecy, his rejection and sufferings.  She prayed what he prayed -- that the proud be overthrown in the conceit of their hearts, that the hungry be fed and the rich sent empty away, that the meek and lowly live with dignity and the powerful dethroned.  On the road to Calvary, Mary stood with her son and endured humiliation, mocking and ridicule.  She symbolizes all who stand in solidarity with those whose pain is public.  She stands with women who have illegitimate children, with those who contract AIDS, with men and women marginalized because of their sexuality.  And she stands with all who befriend them.

From the Seventh Station: Jesus Stumbles a Second Time.  Jesus wasn't just accomplishing our salvation: more importantly, He was stickin' it to The Man:

The violence of the system degrades, keeps down, rejects and never forgets failure and weakness.  So many in our society fall again and again under the burden.  We have names and categories for them: alcoholics, addicts, abusers.  It's so easy to see them as problems rather than persons with individual stories.  It's so easy to forget how many are victims of our failed educational, economic and legal systems, scapegoats of racism, sexism and intolerance.  Actually, it's a miracle that the journey continues at all and that anyone marginalized by the system gets up again.

From the Eighth Station: The Women of Jerusalem Weep for Jesus.  Another blow against American imperialism:

From the Eleventh Station: Jesus Is Nailed to the Cross.  The Good Thief erred when he told the other thief that they were getting what they deserved:

Jesus is executed by being nailed to a piece of wood, hung naked, exposed to taunts, reduced to an object of ridicule.  Public crucifixions continue today, only in place of wooden beams there is a gas chamber, electric chair, injection, firing squad.  The death penalty is not our right.

O God, forgive us for we know not what we do.  Help us to work against the death penalty, to stand against legally sanctioned death.

From the Thirteenth Station: Jesus Is Taken Down from the Cross.  Our lives are only worthwhile if the world smiles on us:

We all have the same reason for living.  How will we know if our lives have been worthwhile?  The criteria is [sic] clear.  Will others remember us for our mercy, our kindness, our truth-telling, our compassion, our faithfulness.  [Sic.]  Have we, in other words, done the will of God?

From the Fourteenth Station: Jesus Is Laid in the Womb of Mother Earth:

The body of Jesus was returned to the earth.  It was interred with the waste, the refuse of society.  The earth took back its creator and maker.  The womb of Mother the Earth received the flesh of the Sun of Justice, just as Father the Sky embraced his last cry and prayer.

Time to throw out the left-wing pabulum and go back to the authentic devotion of the Stations of the Cross.  Time to live again by the wisdom the Che-wannabes have thrown out:

I decided to know nothing among you except Jesus Christ and him crucified.