At 3:34 a.m. local time, a magnitude 8.8 earthquake struck Chile.  Centered off the coast of central Chile, the quake lasted for an incredible three minutes.   Chilean President Michelle Bachelet announced that the death toll so far is 708, and has declared a "state of catastrophe" in central Chile.  Half a million homes have been devastated.  The tsunami touched off by the quake -- the seventh-largest ever recorded -- traveled as far as Japan and Russia, but did little damage.

2010 is turning out to be a very busy year for St. Emedius, patron against earthquakes.  May he intercede for the devastated Chileans, and may his intercession stave off any further such disasters. 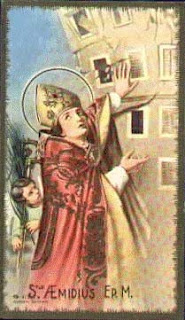