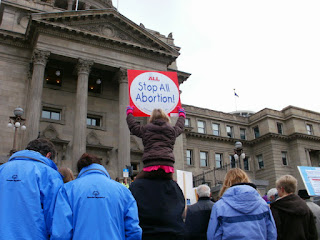 With the battle over end-of-life issues widening and intensifying, the pro-life movement is giving more and more attention to euthanasia and assisted suicide; and so, the keynote speaker at the March for Life rally in Boise last Saturday was David Gibbs, the attorney who fought to save Terri Schiavo.  I can recall that as the war over Terri Schiavo's life raged, her husband Michael -- with his baby-mama and his big, fat malpractice settlement -- alleged that his unfortunate wife had previously expressed a wish never to be maintained in a condition such as that which eventually provided a rationale for her judicially-sanctioned murder.

I, like everyone else, pray that I never become a helpless prisoner in a paralyzed body or a profoundly damaged brain.  On the other hand, I do not want anybody playing God and cutting the thread of my life before its time.  So, lest a time should come when somebody pretends to be complying with my purported wishes to be euthanized in the event of serious illness or injury, I wish to state now and for the record that:

-- I do want to be hooked up to as many machines as it takes to keep me alive, for as long as necessary.

-- I do want whatever procedures my situation indicates, and to have the risks and benefits of such procedures weighed by myself or my designated representative.

-- I do not want to spare others the trouble and expense of caring for me.  I do want to spare them the folly of murdering me out of a sense of misguided compassion.

And neither will you.

O time despised during life! you will be ardently desired by worldlings at the hour of death.  They will then wish for another year, another month, another day; but they will not obtain it: they will then be told that time shall be no longer.  How much would they then pay for another week, or another day, to settle the accounts of their conscience?  To obtain a single hour, they would, says St. Laurence Justinian, give all their wealth and worldly possessions.  But this hour shall not be given.