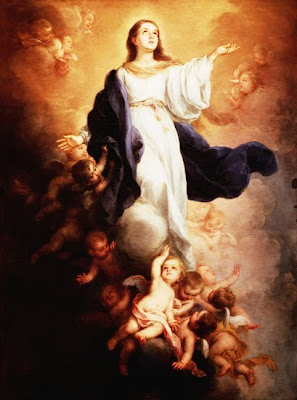 
The Fathers and writers of the Church, well versed in the heavenly Scriptures, had nothing more at heart than to vie with one another in preaching and teaching in many wonderful ways the Virgin's supreme sanctity, dignity, and immunity from all stain of sin, and her renowned victory over the most foul enemy of the human race. This they did in the books they wrote to explain the Scriptures, to vindicate the dogmas, and to instruct the faithful. These ecclesiastical writers in quoting the words by which at the beginning of the world God announced His merciful remedies prepared for the regeneration of mankind -- words by which He crushed the audacity of the deceitful serpent and wondrously raised up the hope of our race, saying, "I will put enmities between you and the woman, between your seed and her seed" [Genesis 3:15] -- taught that by this divine prophecy the merciful Redeemer of mankind, Jesus Christ, the only begotten Son of God, was clearly foretold: That His most Blessed Mother, the Virgin Mary, was prophetically indicated; and, at the same time, the very enmity of both against the evil one was significantly expressed. Hence, just as Christ, the Mediator between God and man, assumed human nature, blotted the handwriting of the decree that stood against us, and fastened it triumphantly to the cross, so the most holy Virgin, united with Him by a most intimate and indissoluble bond, was, with Him and through Him, eternally at enmity with the evil serpent, and most completely triumphed over him, and thus crushed his head with her immaculate foot.

This sublime and singular privilege of the Blessed Virgin, together with her most excellent innocence, purity, holiness and freedom from every stain of sin, as well as the unspeakable abundance and greatness of all heavenly graces, virtues and privileges -- these the Fathers beheld in that ark of Noah, which was built by divine command and escaped entirely safe and sound from the common shipwreck of the whole world;[cf. Genesis 6:9] in the ladder which Jacob saw reaching from the earth to heaven, by whose rungs the angels of God ascended and descended, and on whose top the Lord himself leaned [cf. Genesis 28:12] in that bush which Moses saw in the holy place burning on all sides, which was not consumed or injured in any way but grew green and blossomed beautifully; [cf. Exodus 3:2] in that impregnable tower before the enemy, from which hung a thousand bucklers and all the armor of the strong; [cf. Song of Songs 4:4] in that garden enclosed on all sides, which cannot be violated or corrupted by any deceitful plots; [cf. Song of Songs 4:12] as in that resplendent city of God, which has its foundations on the holy mountains; [cf. Psalm 87:1] in that most august temple of God, which, radiant with divine splendors, is full of the glory of God; [cf. Isaiah 6:1-4] and in very many other biblical types of this kind. In such allusions the Fathers taught that the exalted dignity of the Mother of God, her spotless innocence and her sanctity unstained by any fault, had been prophesied in a wonderful manner.

In like manner did they use the words of the prophets to describe this wondrous abundance of divine gifts and the original innocence of the Virgin of whom Jesus was born. They celebrated the august Virgin as the spotless dove, as the holy Jerusalem, as the exalted throne of God, as the ark and house of holiness which Eternal Wisdom built, and as that Queen who, abounding in delights and leaning on her Beloved, came forth from the mouth of the Most High, entirely perfect, beautiful, most dear to God and never stained with the least blemish.

When the Fathers and writers of the Church meditated on the fact that the most Blessed Virgin was, in the name and by order of God Himself, proclaimed full of grace [cf. Luke 1:28] by the Angel Gabriel when he announced her most sublime dignity of Mother of God, they thought that this singular and solemn salutation, never heard before, showed that the Mother of God is the seat of all divine graces and is adorned with all gifts of the Holy Spirit. To them Mary is an almost infinite treasury, an inexhaustible abyss of these gifts, to such an extent that she was never subject to the curse and was, together with her Son, the only partaker of perpetual benediction. Hence she was worthy to hear Elizabeth, inspired by the Holy Spirit, exclaim: "Blessed are you among women, and blessed is the fruit of your womb."[Luke 1:42]

Accordingly, the Fathers have never ceased to call the Mother of God the lily among thorns, the land entirely intact, the Virgin undefiled, immaculate, ever blessed, and free from all contagion of sin, she from whom was formed the new Adam, the flawless, brightest, and most beautiful paradise of innocence, immortality and delights planted by God Himself and protected against all the snares of the poisonous serpent, the incorruptible wood that the worm of sin had never corrupted, the fountain ever clear and sealed with the power of the Holy Spirit, the most holy temple, the treasure of immortality, the one and only daughter of life -- not of death -- the plant not of anger but of grace, through the singular providence of God growing ever green contrary to the common law, coming as it does from a corrupted and tainted root.

As if these splendid eulogies and tributes were not sufficient, the Fathers proclaimed with particular and definite statements that when one treats of sin, the holy Virgin Mary is not even to be mentioned; for to her more grace was given than was necessary to conquer sin completely. They also declared that the most glorious Virgin was Reparatrix of the first parents, the giver of life to posterity; that she was chosen before the ages, prepared for Himself by the Most High, foretold by God when He said to the serpent, "I will put enmities between you and the woman."[Genesis 3:15] -- unmistakable evidence that she crushed the poisonous head of the serpent. And hence they affirmed that the Blessed Virgin was, through grace, entirely free from every stain of sin, and from all corruption of body, soul and mind; that she was always united with God and joined to Him by an eternal covenant; that she was never in darkness but always in light; and that, therefore, she was entirely a fit habitation for Christ, not because of the state of her body, but because of her original grace.

Wherefore, in humility and fasting, we unceasingly offered our private prayers as well as the public prayers of the Church to God the Father through His Son, that He would deign to direct and strengthen our mind by the power of the Holy Spirit. In like manner did we implore the help of the entire heavenly host as we ardently invoked the Paraclete. Accordingly, by the inspiration of the Holy Spirit, for the honor of the Holy and undivided Trinity, for the glory and adornment of the Virgin Mother of God, for the exaltation of the Catholic Faith, and for the furtherance of the Catholic religion, by the authority of Jesus Christ our Lord, of the Blessed Apostles Peter and Paul, and by our own:

Hence, if anyone shall dare -- which God forbid! -- to think otherwise than as has been defined by us, let him know and understand that he is condemned by his own judgment; that he has suffered shipwreck in the faith; that he has separated from the unity of the Church; and that, furthermore, by his own action he incurs the penalties established by law if he should dare to express in words or writing or by any other outward means the errors he thinks in his heart.

Let all the children of the Catholic Church, who are so very dear to us, hear these words of ours. With a still more ardent zeal for piety, religion and love, let them continue to venerate, invoke and pray to the most Blessed Virgin Mary, Mother of God, conceived without original sin. Let them fly with utter confidence to this most sweet Mother of mercy and grace in all dangers, difficulties, needs, doubts and fears. Under her guidance, under her patronage, under her kindness and protection, nothing is to be feared; nothing is hopeless. Because, while bearing toward us a truly motherly affection and having in her care the work of our salvation, she is solicitous about the whole human race. And since she has been appointed by God to be the Queen of heaven and earth, and is exalted above all the choirs of angels and saints, and even stands at the right hand of her only-begotten Son, Jesus Christ our Lord, she presents our petitions in a most efficacious manner. What she asks, she obtains. Her pleas can never be unheard.

Given at St. Peter's in Rome, the eighth day of December, 1854, in the eighth year of our pontificate. 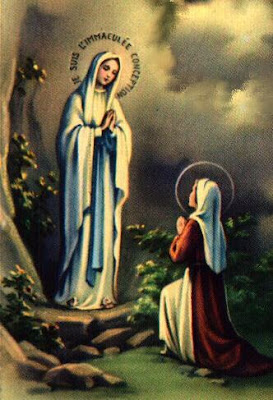