Every protest rally has its cranks, and the Boise Tea Party was no different. But, as Zombietime out of the Bay area documents, a liberal rally is almost all cranks. The vast majority of the protest signs at their shindigs are either pre-printed and mass-produced by liberal/anarchist attack groups, or homemade by illiterates, full of obscenities, incoherent phrases and copious spelling errors. By contrast, nearly all the signs I saw at the Tea Party -- most of which were homemade -- were pretty good, and some were quite clever. I saw a couple of rambling and hard-to-read signs (not including those of two counterprotesters that I saw) but no obscenities, and nothing that looked like it was executed by a kindergartner on crack. 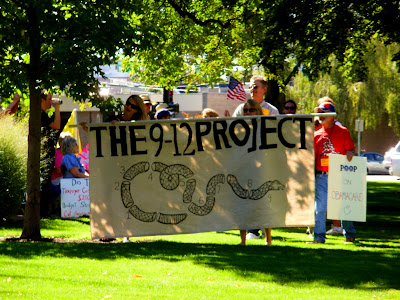 This guy must have a pretty high tolerance level if his first time being ashamed of his President wasn't the Clinton era -- making Obama REALLY bad. 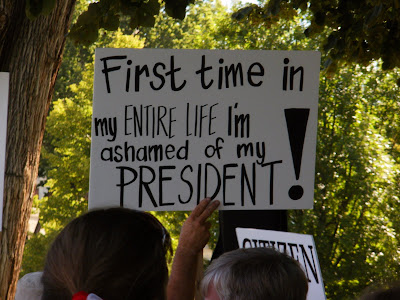 Violating the separation of Church and state on public property by citing to the Bible. Incidentally, the rally opened with a prayer in which -- horror of horrors -- Jesus Christ was invoked in a public park!!! 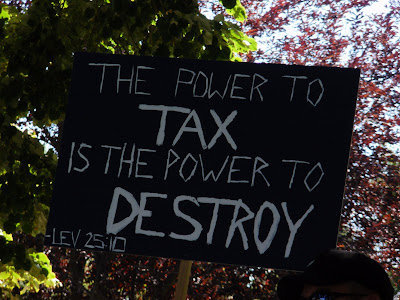 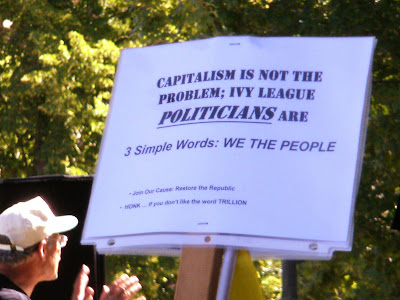 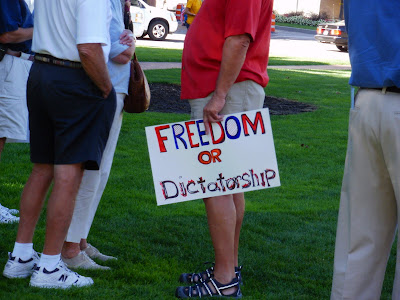 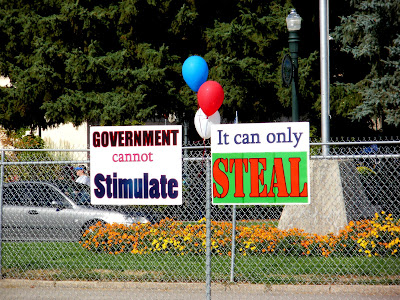 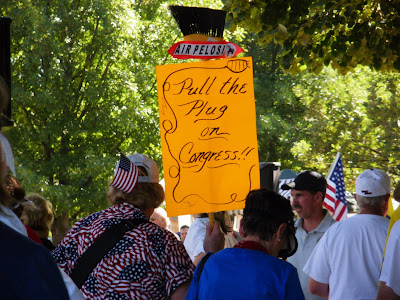 One of many signs calling for term limits: 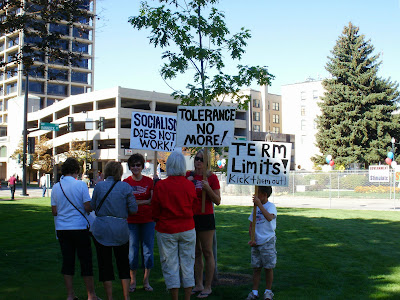 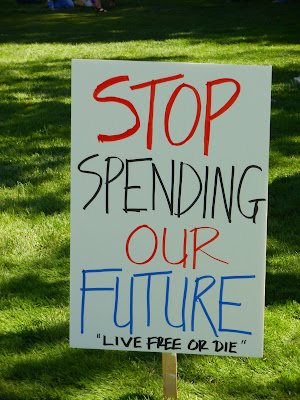 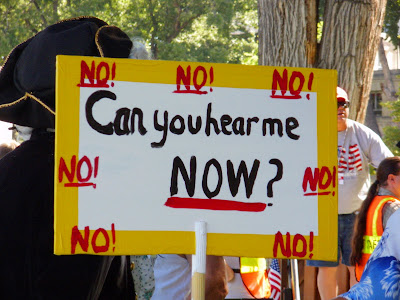 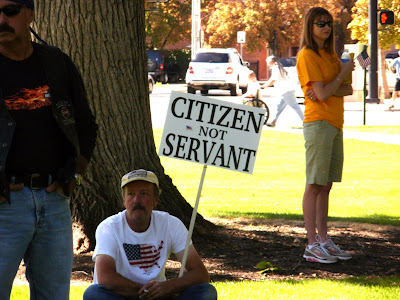 The "Don't Tread on Me" symbol -- the one the Obama administration thinks is a banner of domestic terrorism -- was everywhere. 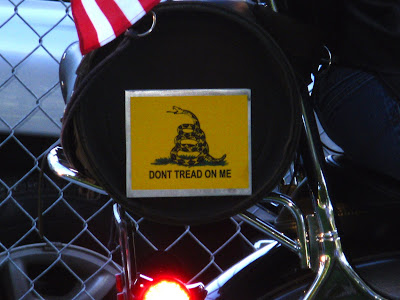 Almost all the bikers -- all of whose bikes, incidentally, were all shined up and in excellent condition -- had "Don't Tread on Me" flags. 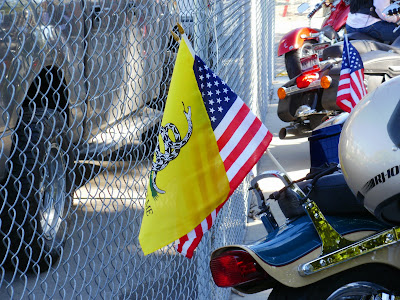 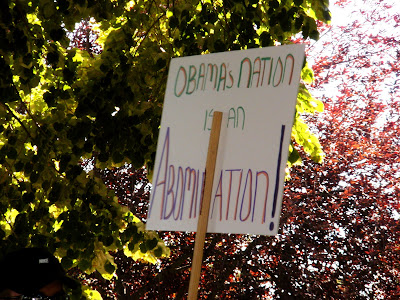 There were quite a few signs calling for no government funding of abortion. Here was one of the best: 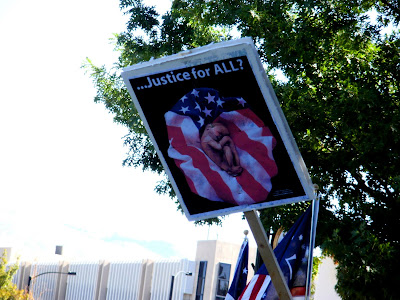 The Obama logo was widely lampooned: 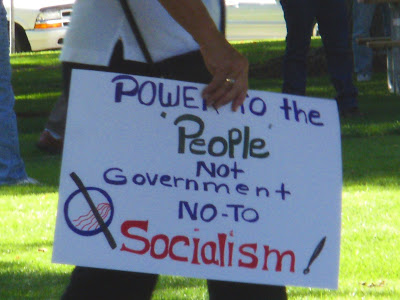 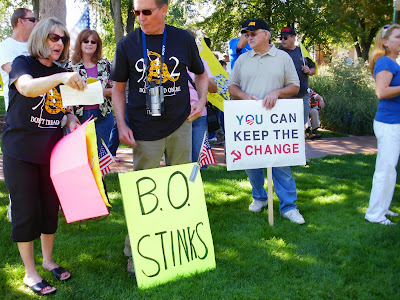 ACORN was also targeted. The sign on the right below: "The Liberty Tree Did Not Grow from an ACORN." 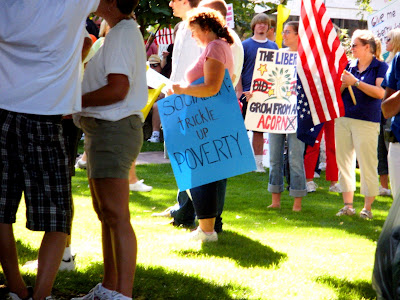 Next to the "ACORNS ARE NUTS" sign: "HONK If I'm Paying Your MORTGAGE!" 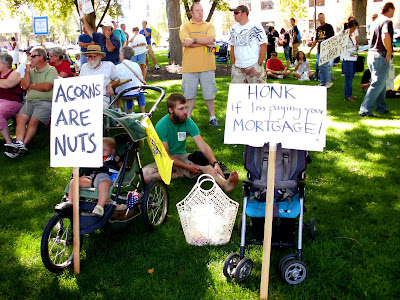 The mainstream Obamabot media, weighed down with its many offenses against republicanism (with a small "r") did not escape notice: 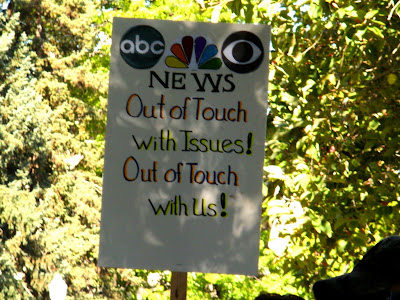 Three of my personal favorites: 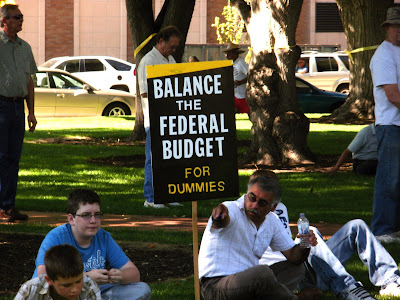 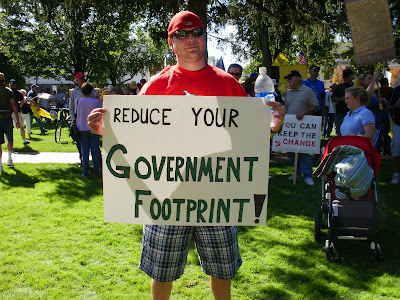 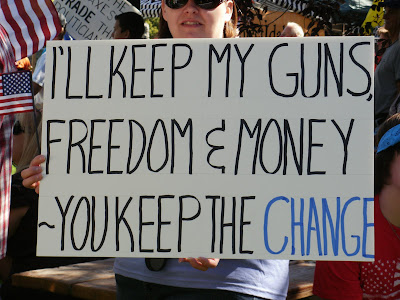 Liberals -- especially those with power and influence -- are always saying that "speaking truth to power" is an act of virtue, and that dissent is the highest form of patriotism and the greatest act of love for one's country. On this occasion at least, they have a point.
Posted by Anita Moore at 17:38