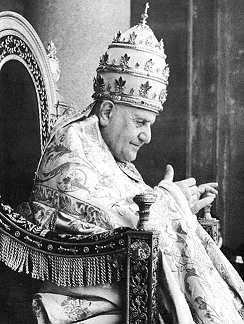 The lefties and dissenters in the Church absolutely adore Bl. John XXIII. He it was who convened the Second Vatican Council, inaugurating the Summer of Love in the Catholic Church. He was Jimi Hendrix with the Fisherman's Ring, belting out the Te Deum on the electric guitar, putting to flight the stiff, stuffy, suffocating traditions that bound authentic Christianity like the coils of a boa constrictor. To the heterodox, Bl. John XXIII is the great herald, prophet and patron saint of the Age of Aquarius.

But in fact, just as the heterodox prefer their own fantasy of Vatican II as the Woodstock of Catholicism to the actual teachings of Vatican II, so it is not really John XXIII they love, but rather their own fevered hippy imaginings projected onto John XXIII. The actual teachings of John XXIII (pictured here in that most politically incorrect piece of headgear, the Triregnum) would throw Sr. Joan Chittister into a foaming, purple rage. Case in point: Veterum Sapientia, his 1962 Apostolic Constitution on the importance of Latin as the language of the Church.

Bl. John begins by outlining the reasons why Latin is the language of the Church, and why it is most fitting as the language of the Church: it is a vital link to the past; it feeds no nationalistic prejudices; it is universal and immutable, and therefore fitting for the preservation of doctrine; it is noble and beautiful in its structure. Then comes the resolve (emphasis added):

And We also, impelled by the weightiest of reasons -- the same as those which prompted Our Predecessors and provincial synods 13 -- are fully determined to restore this language to its position of honor, and to do all We can to promote its study and use. The employment of Latin has recently been contested in many quarters, and many are asking what the mind of the Apostolic See is in this matter. We have therefore decided to issue the timely directives contained in this document, so as to ensure that the ancient and uninterrupted use of Latin be maintained and, where necessary, restored.

We believe that We made Our own views on this subject sufficiently clear when We said to a number of eminent Latin scholars:

"It is a matter of regret that so many people, unaccountably dazzled by the marvelous progress of science, are taking it upon themselves to oust or restrict the study of Latin and other kindred subjects.... Yet, in spite of the urgent need for science, Our own view is that the very contrary policy should be followed. The greatest impression is made on the mind by those things which correspond more closely to man's nature and dignity. And therefore the greatest zeal should be shown in the acquisition of whatever educates and ennobles the mind. Otherwise poor mortal creatures may well become like the machines they build -- cold, hard, and devoid of love."

After the resolve come the decrees:

-- Latin is to be a prerequisite to ecclesiastical studies for all Church students, including those who are called to the priesthood in later life and whose classical education was deficient.

-- The traditional Latin curriculum is to be restored.

-- The sacred sciences are to be taught in Latin.

-- There is to be a Latin Academy.

-- Seminarians must also be taught Greek.

-- A syllabus for teaching Latin is to be prepared and faithfully observed.

Bottom line: those who have a problem with Latin have a problem with Bl. John XXIII. Tribunus at Roman Christendom, whom I thank for reminding me of this scrupulously ignored document, has the whole text.
Bl. John XXIII may have been cuddly and adorable and humorous, but he is not the fool of the heterodox. By disregarding and disobeying his teachings, the heterodox prove that their love for John XXIII is a sham.
Posted by Anita Moore at 00:39