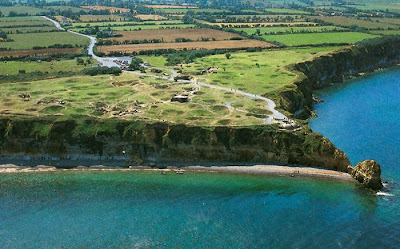 Would you ever guess, at first glance, that war's white-hot fury had ever touched this place? But a close look reveals the scars of the battle that took place here sixty-five years ago, where tens of thousands of British and American soldiers and their allies poured out their blood in the largest amphibious assault in all of history -- the assault that breached Fortress Europe and led to the downfall of Hitler and his murderous regime.

This 65th anniversary may be the last big anniversary that will be attended by D-Day veterans -- although there are still one surviving American and three British veterans of World War I, 95 years after that war began. In commemoration of The Longest Day, here are three classics that are becoming D-Day traditions in this space -- none the worse for having been posted before.
Posted by Anita Moore at 12:03