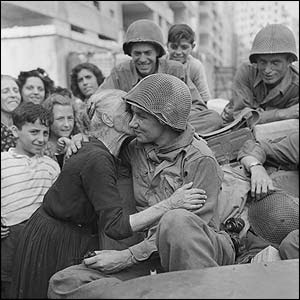 At any rate, it was certainly forgotten by me the other day. We tend to forget all about the anniversary of the Allies' capture of Rome, because it is overshadowed by D-Day, which took place only two days later.

Lt. General Mark Clark, who led the liberation of Rome, visited Pope Pius XII and apologized for disturbing him with the noise of his tanks. The Holy Father's smiling response: "General, any time you come to liberate Rome, you can make just as much noise as you like!"