October 9th: (Hopefully, Before Too Much Longer) The Future Feast of Pius XII 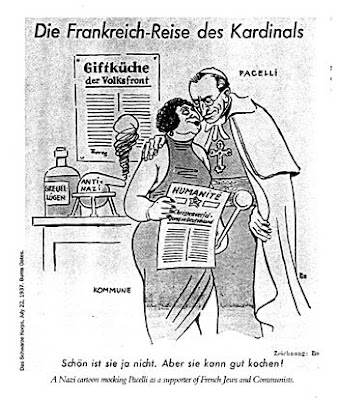 The people of Israel will never forget what His Holiness and his illustrious delegates, inspired by the eternal principles of religion, which form the very foundation of true civilization, are doing for our unfortunate brothers and sisters in the most tragic hour of our history, which is living proof of Divine Providence in this world.

Rabbi Isaac Herzog, chief rabbi, British Mandate of Palestine, March 1945
Apparently, they have forgotten -- or at least some of them have -- and this within living memory of those times. Rabbi Shear-Yashuv Cohen, chief rabbi of Haifa, addressing Pope Benedict and the Vatican Synod of Bishops Monday, stated that the Jews "cannot forgive and forget" the silence of major religious leaders in the face of the slaughter of Jews during the Holocaust.

After learning that Pope Benedict XVI would celebrate a Mass today in honor of the 50th anniversary of Pius XII's death, the rabbi vouchsafed to reporters the news that he would probably not have accepted an invitation to address the Synod of Bishops at the Vatican if he had known Pius XII would be so honored. "He may have helped in secrecy many of the victims and many of the refugees," said Cohen, "but the question is could he have raised his voice and would it have helped or not? We, as the victims, feel yes. I am not empowered by the families of the millions of deceased to say 'we forget, we forgive.'" In a stunning act of disloyalty to the truth, Cohen went on to dismiss, on political grounds, mountains of historical evidence on Pope Pius' wartime activities: "I have to make it very clear that we, the rabbis, the leadership of the Jewish people, cannot as long as the survivors still feel painful agree that this leader of the Church in a time of crisis should be honored now. It is not our decision. It pains us. We are sorry it is being done." Then, having rendered judgment at length, Cohen went on to depart from logic, saying that only God knows if Pope Pius spoke out enough against the Holocaust: "God is the judge...He knows the truth" about Pope Pius XII.

Fortunately, Pope Benedict responded strongly to this insulting and absurd attack on his wartime predecessor. In his homily today, Pope Benedict spoke of the love of Pope Pius, "a love made manifest in the intensity with which he promoted works of charity in defense of the persecuted, with no distinction of religion, ethnicity, nationality or political views. ... How can we forget his radio message of Christmas 1942? His voice breaking with emotion, he deplored the situation of 'the hundreds of thousands of people who, with no individual blame, are sometimes, because of their nationality or race, destined for death or progressive exploitation', a clear allusion to the deportations and extermination being perpetrated against the Jews." He also expressed support for the late Pope's journey to sainthood, praying that the cause for his beatification would proceed favorably.

Rabbi Cohen, who is eighty, is old enough both to remember the days of Pius XII and to know better than to place himself at odds with the truth, as witnessed by many of his most prominent co-religionists (source: Dr. Joseph L. Lichten, A Question of Judgment: Pius XII and the Jews, 1963, available online in its entirety):

More than anyone else, we have had the opportunity to appreciate the great kindness, filled with compassion and magnanimity, that the Pope displayed during the terrible years of persecution and terror, when it seemed that there was no hope left for us.

We share the grief of the world over the death of His Holiness Pius XII. During a generation of wars and dissensions, he affirmed the high ideals of peace and compassion. During the ten years of Nazi terror, when our people went through the horrors of martyrdom, the Pope raised his voice to condemn the persecutors and to commiserate with their victims. The life of our time has been enriched by a voice which expressed the great moral truths above the tumults of daily conflicts. We grieve over the loss of a great defender of peace.

With special gratitude we remember all he has done for the persecuted Jews during one of the darkest periods in their entire history.

-- Rabbi Safran of Bucharest, in a letter to the Papal Nuncio in 1944:

In these harsh times our thoughts turn more than ever with respectful gratitude to what has been accomplished by the Sovereign Pontiff on behalf of Jews in general and by Your Excellency on behalf of the Jews of Romania and Transnistria. In the most difficult hours which we Jews of Romania have passed through, the generous assistance of the Holy See, carried out by the intermediary of your high person, was decisive and salutary. It is not easy for us to find the right words to express the warmth and consolation we experienced because of the concern of the supreme Pontiff, who offered a large sum to relieve the sufferings of deported Jews, sufferings which had been pointed out to him by you after your visit to Transnistria. The Jews of Romania will never forget these facts of historic importance.

It is quite unfortunate that these historic facts would be forgotten, and within the space of a generation. It is unfortunate that certain prominent men continue publicly to trumpet the lies, even after they have been blasted out of the water. But that Rabbi Shear-Yashuv Cohen refuses to take his place among such illustrious witnesses as these is more of a loss to him than to them.
Posted by Anita Moore at 17:13